Rolling Stone: Stories From The Edge - 50 Years of Defining Culture

By DOUG COLLETTE
October 7, 2018
Sign in to view read count 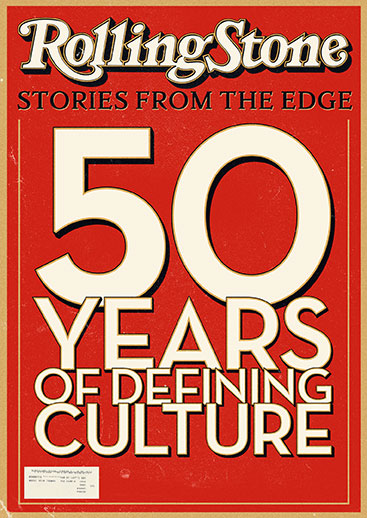 In its two DVD's, six-chapters and four hours-plus total running time (which might well have been twice that length to be truly comprehensive_, Stories From the Edge ostensibly (and fitfully) covers history also laid out in the coffee table book 50 Years of Rolling Stone: The Music, Politics And People That Shaped Our Culture (Harry N. Abrams, 2017) and, to a slightly lesser extent (and from a decidedly different vantage point), Joe Hagan's bio Sticky Fingers: The Life and Times of Jann Wenner and Rolling Stone Magazine (Canongate Books Ltd; 2017).

In the end, the documentary is designed to appeal to a targeted demographic that really isn't interested in anything more than superficial knowledge of the colorful but blemished progression of Rolling Stone Magazine. Accordingly, this film is less a chronicle of the publication's evolution than a carefully cherry-picked series of narratives, full of contradictions and mixed messages; the directors and producers redeem themselves and their work near the end, but it's an open question if the intended audience has sufficient attention span to get that far (or will find the incentive to accurately skip to it).

From an objective cultural point of view, the continued existence of the publication today may be little more than a source of minor bemusement to more than a few viewers, so it makes perfect sense for the narrative to almost immediately angle toward sensationalism: after a relatively short factual account of the gestation of the publication by founder Jann Wenner, his long-time partner Jane and Ralph J Gleason, firmly-entrenched in the fast-changing times of the late Sixties era as an established writer for the San Francisco Chronicle , the narrative veers off into depiction one of the first non-musical features of the magazine, an investigation of the groupie phenomenon of the late Sixties.

It should hardly come as a surprise then that much emphasis of the the magazine's approach to serious journalism appears only late in this piece. To be fair, the first inkling of its significance does surface (at least implicitly) in the aforementioned feature as well as the examination of the creative and personal relationship of Ike & Tina Turner. But scant as is the (almost accidental) allusion to the sordid side of the couple's dynamic, it hardly adds to the growing significance of that theme in Stories From The Edge; on the contrary, this juncture launches the vacillation between the salacious and the self-congratulatory. The end result finds this episode in the HBO Documentary Series leaving a lasting impression of Rolling Stone as a cultural weather-vane rather than a cultural bellwether.

That point in the story, however, serves the purpose of introducing photographer Annie Leibovitz as the figurehead of a pronounced and corollary emphasis on her craft/art in the evolution of the publication. But it's an otherwise substantive element more than a little undermined by positing Cameron Crowe in a similarly elevated position in the development of serious journalism by Wenner and his staff. The fact that endeavors in that area, like the famous 1970 interview with John Lennon, often turned idolatrous of its subject hints Rolling Stone was the first 'celebrity' magazine, but, more importantly, the topic begs the question if such moves are innovative thinking or social climbing.

Along those same lines, it's may be less than startling to hear Crowe's account of a dressing down for a Led Zeppelin feature in 1975 by the founder/publisher. But Wenner's fawning approach to Lennon (the lionization of whom continued in the wake of his death) and other artists isn't emphasized to a great degree here. The cult of personality does otherwise weighs heavily into this film's unfolding, as Crowe's recurring interview intervals indicate, but the omission of even cursory mention of his eventual turn to film (Fast Times At Ridgemont High, Almost Famous) only reaffirms the initially patronizing attitude applied to the examination of Gonzo author Hunter Thompson. Suffering proportionately as a result of its glib tone is the sympathetic but homogenized view of the latter's, and by extension and the magazine's, influence on so-called New Journalism (exponents of which include but are not limited to, Tom Wolfe, author of The Electric Kool-Aid Acid Test (Farrar Straus Giroux, 1968) among other important tomes).

The later emphasis of coverage afforded the Patty Hearst kidnapping story may further confound long-term followers of Rolling Stone. It's a topic that should've been an extension of RS reporters' initial assumption of responsibility as an alternative to mainstream media through their extensive coverage of the Rolling Stones free concert debacle at Altamont in 1969. This oversight only furthers the somewhat casual revisionism at work in Stories From The Edge, as does the segment devoted to the operation's move from its original San Francisco home to New York. Subsequent examination of punk rock etc, seemingly only tangentially related to the story at hand, thereby undercutting the subtitle 50 Years of Defining Culture, unless of course that phrase is meant tongue-in-cheek as applied to the film a deliberate nod to the ephemeral nature of its subject).

That said, it's only fair to point out how deeply relevant to these Trumpian times is the dissection of the rise of Richard Nixon, while depiction of the emergence of the Christian right, including the downfall of Jimmy Swaggart, is near explosive in its irony. And it's eye-opening to muse on the career path of record reviewer Jon Landau, who joined the RS staff to elevate the importance of its critical analysis: it's a move that led to his position as the long-time manager/mentor of Bruce Springsteen, but the implied careerism may pique less curiosity than early stage footage of the latter looking altogether scruffy.

At the point a somewhat begrudging nod to cultural icon Bob Dylan appears, the erratic trajectory of filmmakers Blair Foster and Alex Gibney's opus becomes all too apparent, unless viewers give them fairly sizable benefit of the doubt for cinematic savvy. No question the pair do deserve plaudits for maintaining at least a modicum of creative and objective balance over the course of Stories From The Edge there is a real sense they realize David Bowie and The Clash are as important to their respective audiences as the Nobel Laureate is to his. Still, it's worth debating whether the presence of perennial Law and Order actor Ice-T's eloquent broadminded and perceptive narration of the hip-hop chapter constitute a palpable sign the directors and producers know their audience or are simply appealing to the lowest common denominator (not that the two approaches are mutually exclusive).

The lack attention the filmmakers pay to the publication's financial travails over the years may simply be a result of wise editing decisions (see Hagan's work for that). It's certainly not so pertinent as the account of the notorious and ill-fated RS rape case feature in 2014; arguably indispensable to this chronicle, while its inclusion is indisputably courageous, its impact becomes somewhat muted by Wenner's seemingly nonchalant dismissal of the root cause of this egregious faux pas of editorial integrity: his disinterested nonchalance, again hearkens to the unseemly portrait painted in his biography, especially as it echoes through the intros repeated seemingly redundantly for each chapter on the two DVD's here.

Excerpts from the original declaration of the magazine's mission statement in its initial issue may sound, in turn, prescient or supremely self-aware, even as the co-founders seemingly humble closing statement could come across equally self-serving. The optimism of his message rings near-desperate in his voice even as it resonates in the pained expression on the man's face as captured by the camera. Intended or not, it is the kind of potentially haunting scene that emphatically concludes many great pieces of cinema and is not wholly out of place as the conclusion to Stories From The Edge.