Roger Daltrey: Thanks A Lot Mr Kibblewhite - My Story

By DOUG COLLETTE
December 2, 2018
Sign in to view read count 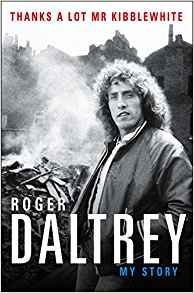 Unlike most rock and roll memoirs, Roger Daltrey's is not a tell-all. Far from it, because, like most interviews the author conducts, Thanks A Lot Mr Kibblewhite is based on the 'less said the better' premise. In two-hundred-forty some pages, the lead vocalist of The Who is terse and to-the point, perhaps too much so for some readers eager for depth of detail and/or hungry for gossip. The subtitle, then, My Story, carries unusual emphasis: it is a declaration almost defiant in its statement of purpose.

In recounting his life early, middle and late, Daltrey writes in short sharp sentences, strictly from his own point of view. Whether it's the perspective of the stage or as the actual founding member of the British group, Daltrey makes no bones about his opinions or his actions, so much so that, when he attempts introspection and/or self-analysis, he stumbles in his prose: if not lost for words, he fumbles, often repeatedly, only then offering a merely glib vacuity or two, as on the mystical sensation of music or the importance of family.

That is, of course, in stark contrast to Pete Townshend, the one other surviving member of the Who. As contained in his own book Who I Am (Harper, 2013)—and on-line as well as in his actual compositions—the guitarist/vocalist/songwriter's fluid command of language communicates a vivid sense of self and his place in the history of the group as well as in his own life. But, even within the confines of Roger Daltrey's preference to stay busy and take action, Townshend's down-to-earth partner illustrates how the two have become such complementary creative partners over the years

For all his professions of insecurity, the singer is keenly aware of his role as a mouthpiece for Townshend's songs and has, to his credit, always hewed close to the line of that interpretive position. Daltrey is generally so offhanded in his comments that, unless the reader is familiar with his career path as a member of the group and as a solo artist, his assumption of advocacy for his band mate's songwriting may lose its significance. But then, the author isn't out for significance here, but rather to give his take on the course of his life, from childhood to the present.

Thankfully, Daltrey doesn't belabor his early days in (post-) wartime England. Anyone who's read similar treatises from musicians of his generation—see Keith Richards Life (Little, Brown and Company, 2010) has heard enough about bombed out tenement buildings, food shortages and the general lack of basic amenities, etc. But considering the somewhat camouflaged awe with which Daltrey regards the long-term existence of the Who, in all its varied incarnations, it might stand to reason that he would spend more time and attention on the current alignment with just he and Townshend: he doesn't actually give it short shrift, but takes such a hands-off approach to the subject, it's as if he fears too much analysis will destroy it

Intentionally or not, though, Roger Daltrey makes the group's modern motivation(s) seem almost purely mercenary, a fait accompli as the logical extension of his ambition(s) all along. And that's at least somewhat odd given his fascination with the personnel makeup of the original quartet: if there's one recurring theme of Thanks A Lot Mr Kibblewhite, it is this singer's often (but not always) bemused regard for the precarious balance involving himself, Townshend, and their late comrades, bassist John Entwistle and drummer Keith Moon. From Daltrey's vantage point, on stage and off, the foursome was perpetually on the brink of terminal fracture.

And the tempestuous relationship of Daltrey and Townshend through the years, including contentious debates in the press and actual physical altercations, would seem to render them the most unlikely pairing in the long run. Yet it may very well be that very volatility, above all (except perhaps the durability of the material) that infuses their modern day concert performances with an intensity that legitimizes them. Of course, the travails of health and other personal issues cast a shadow over the activities as 'The Who" in the early 2000's, superseding whatever friction remains between the two principals, as does, in a more positive realm, their ongoing efforts on behalf of teen cancer research.

Yet, apart from Daltrey's discerning perceptions of his partner, he relays precious little reflection otherwise during the course of My Story, just a dogged and stubborn determination to carry on. It's an admirable attitude to a point, particularly in the early struggles of the Who, but the posture becomes borderline loathsome (if not wholly so) as Daltrey so blithely touches upon the subject of offspring out of wedlock; it's as if his relationships with what he calls 'surprise children' he fathered are no more or less significant than the proper maintenance of his home (significantly, he doesn't detail how many are in his whole family).

So, while there's no granular detail to be gleaned from Thanks A Lot Mr Kibblewhite—its title reference to a dismissive school headmaster—Roger Daltrey's overriding intransigence, the stability within which may be his greatest contribution to the band, ultimately renders more deeply affecting his accounts of bonding with Moon and Townshend, at critical junctures of both their. This man has always known his place and been (fiercely) proud of it, never more so than in this telling of what he's learned about himself and the world he's inhabited his seventy-plus years (so far) on this earth, even if his vision doesn't extend far beyond his own purview.