By JOHN SHARPE
July 17, 2014
Sign in to view read count
Ever since the 2009 debut of the Motion Trio, Portuguese saxophonist Rodrigo Amado has sought to broaden the options available through the addition of more fire power. On both Burning Live (Jazz Ao Centro, 2012) and The Flame Alphabet (Not Two, 2012), Chicago trombonist Jeb Bishop occupied that berth, his garrulous melodicism proving a winning match to Amado's brusque tenor. Two years on and the reedman has a different collaborator on board, as American trumpeter Peter Evans joins him on a brace of recordings, one live and one in the studio.

In this edition of the band the success of the freewheeling dates stems from the contrast between the two horns rather than their shared proclivities. Evans comes on like a supercharged mosquito menacing an angry bear. His extreme virtuosity gives rise to a litany of drones, squeals and multiphonics as he hovers, darts and parries. Amado deals more in broad brush smears compared to Evans' splattered jabs, with something of Archie Shepp about his earthy lyricism and strangulated overblown textures. Nonetheless they play simultaneously lots, and that horn interchange remains at the core of both sessions.

On drums Gabriel Ferrandini, from the acclaimed Red Trio, is fast developing into a modern master, maintaining a pulsing timbrally audacious momentum with a clattering undertow. Cellist Miguel Mira largely takes on the role of the bass, plying a rumbling counterpoint, although for once he does take up his bow contributing some scratchy filigree lines to the interaction at the beginning of "Shadows." The combination of Mira's cello and the drummer's extended tonal palette impart an airy openness to all but the fiercest passages, and there are loads of those. When flying without charts, even in a jazz-derived milieu as here, the depth of the listening and the selection of an appropriate response becomes paramount. Suffice to say that all four players demonstrate these qualities in abundance throughout. Given the participants predilection to blow, although a track might begin quietly it's an odds on bet that it won't end that way. 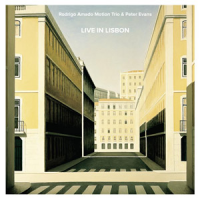 Issued as an LP Live In Lisbon features two side long adventures which hasten through a variety of moods. After a conversational opening, "Conflict Is Intimacy" quickly turns more intense, with dashing trumpet over churning rhythm. A quiet textural interlude, replete with scrapes and mutterings gives way to a tenor saxophone excursion with Ferrandini marking swinging time on his ride cymbal, before a relaxed duet between Evans' train whistle trumpet and Mira's percussive cello. "Music Is The Music Language" shifts between restrained interplay and fiery density. Evans adds another visceral effect to his arsenal whereby he compounds a vocal yell with a pedal point note on trumpet for a startling impact. 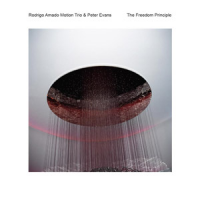 Two days later the foursome took to the studio to cut The Freedom Principle which traverses similar terrain, albeit with slightly more opportunity to explore the possibilities of sound. The title track gets proceedings off to a tremendous start as Amado's probing tenor vies with rattling drums, until an astonishing incessant circular-breathed trumpet buzz suddenly erupts from left field to pin the listener to the wall. Sadly that dynamic isn't sustained, but it establishes the standard for what follows through three lengthy group inventions. Both discs come highly recommended but if forced to plump for one, it would be the last, if only for its longer playing time.

Tracks: Conflict Is Intimacy; Music Is The Music Language.