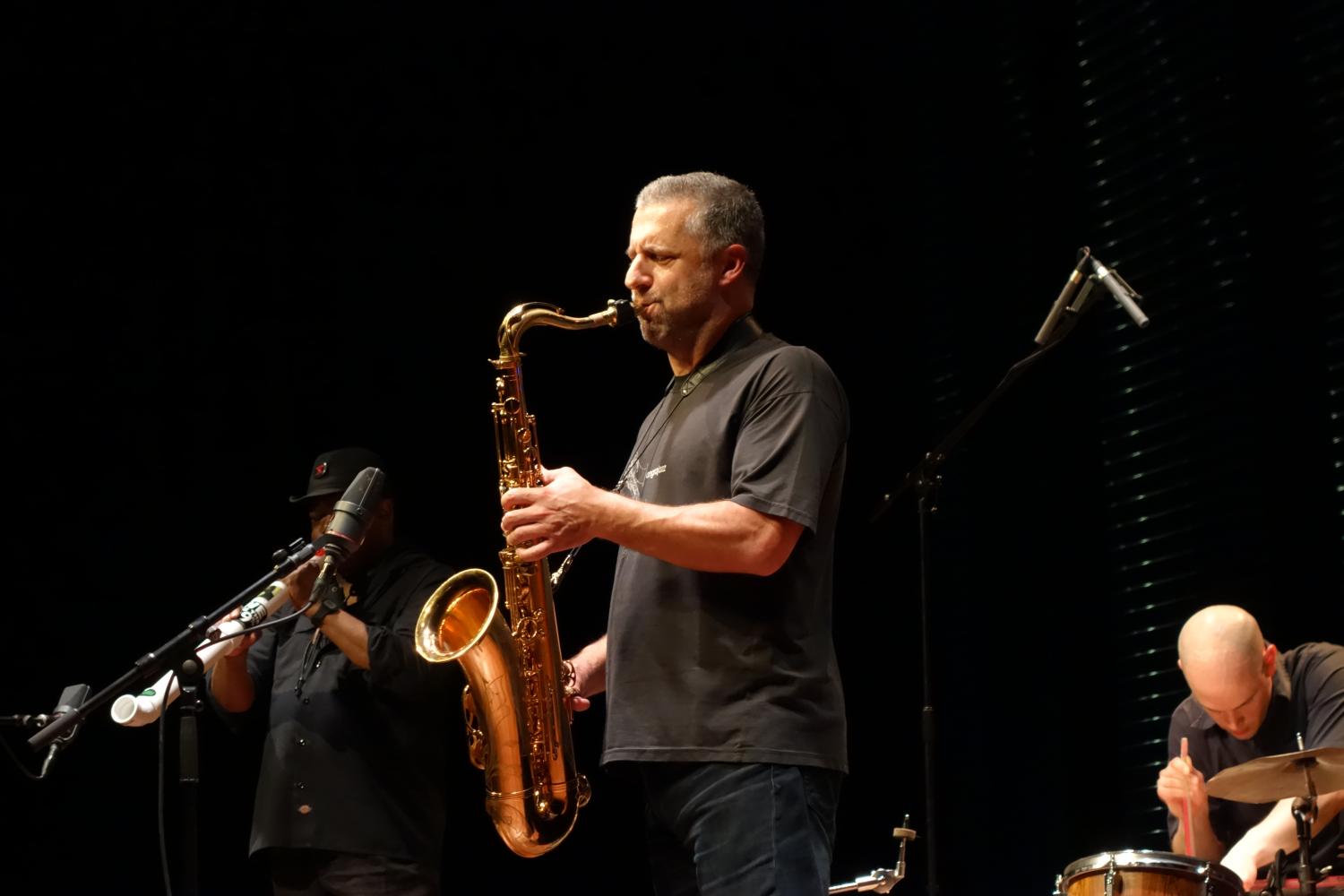 As part of a European tour through nine countries, the Portuguese-North American configuration of Lisbon tenor saxophonist Rodrigo Amado, multi-instrumentalist Joe McPhee (saxophones, trumpet, didgeridoo), bassist Kent Kessler from Chicago, and young drummer Chris Corsano also from New York, finally made its first appearance at Amsterdam Bimhuis. Many will associate these musicians with something like 'raucous free jazz.' The unit's debut album entitled This Is Our Language (Not Two Records, 2015), scores high on 2015 best- of-lists and alludes to Ornette Coleman's programmatic album This Is Our Music from 1961. The music reveals that Coleman is an important influence that has been deeply absorbed and led these musicians into their very own attack and tactics.

The music of the album is motivic and progresses episodically on a vertical and horizontal axis with remarkable rapid switches between episodes and modes of playing—for example speeding up parts heavily culminating at one end and serene parts spreading out at the other. Thus the music can be highly driven at one moment and deeply tranquil at the next. What matters is the way these switches or transitions emerge, are brought about, and are felt as a unity, as part of an underlying thread. It is clearly different from a jump-cut technique or montage. Here the musicians operate in different spheres that nourish each other, are brought together through sustain or quick turns at the right moment in the musician's interplay and its captivating dynamics. The music does not lean on pedal points or repeated returns to a tonal centre. It is left open without losing coherence.

It can, for example, sound quite bluesy, like in the opening piece "The Primal Word," without falling into the common blues pattern. For a live performance this offers a lot of chances and possibilities with these exquisite, strong musicians. Joe McPhee, a thoroughly truthful and sincere voice, is the daring transversal being a master of amazing multiphonics. Kent Kessler can arouse heavy bass rumbles as well as serve all kinds of microtonal shadings and Chris Corsano is an immensely differentiated and driving drummer who carves great relief contours. The concert should reveal a great rapport between those four musicians.

When drummer Chris Corsano started the first piece with rolling swirls, providing a textural carpet and propelling drive, the association "raucous free jazz" immediately seemed to be confirmed, raising the question where it would go. Tenorist Rodrigo Amado commenced with a Von Freeman kind of tone. He blew a clear motivic line of increasing density. It drifted to a melting point where Joe McPhee's sparkling soprano came in carrying it beyond a horizon with chimeric contours arising, contours that eventually materialized and sharpened through mutual confluence of the four instruments' spectral sounds. At other moments motivic lines piled up to fascinating shapes that crumbled and mutated into different gestalt leading into a different energy field and mode of playing. It varied from a stretch of drone music (with McPhee on didgeridoo), to something of a ballad quality shining through or a tranquil, slowly moving part spreading out in space. All these modes emerged from solid, coherent and surprising transitions, fed from a fertile deeper ground and carried by a special spherical garment. These three magicians, however, never got lost in a single mode. Again and again there were remarkable transitions, transitions that had a transcendental quality in the sense that the music entered into and switched between heterogeneous realms flowingly thereby also transcending common tactics used in free jazz.

These four musicians indeed spoke their very own language. It turned out that extraordinary forces were at work, creating music of great clarity, concentration, confluence and transcendence. Together with certain rawness it yielded an oceanic quality, its transatlantic mark. The Bimhuis concert was a memorable and delightful concert—memorable not only in terms of intensity, momentum and convincing coherence, but even in terms of long resonating episodes.

The concert reinforced earlier upwellings of units of Rodrigo Amado. Two years ago I wrote about his Motion Trio with phenomenal fellow musicians, cellist Miguel Mira, drummer Gabriel Ferrandini and guesting trumpeter Peter Evans , regarding a concert at Vossa Jazz Festival in Norway: "it's a heavy calibre unit but the most thrilling qualities of its performance were actually wonderfully floating passages emerging from the heavy roars and salvos, the high energy cross-firing it started with. Just the contrast and the quality of transitions gave it its thrilling effect." About Rodrigo Amado I remarked: "He is a determined, energetic player, but won't overblow just for the sake of showing how heavy he is. He works from and to the structuring of the music no matter if it is quiet or fast and roaring loud. From that quality the aforementioned floating emerged, with the challenge not to rest on it but getting it through to a new thriving transition." That quality is clearly inspiriting the transatlantic quartet too. Hence it seems time now for recognition and more visibility on European stages.