That smirk. That roguish, self-satisfied, da-ya-think-I'm-sexy smirk. It's back and getting bigger everywhere you look. On Leno. On Letterman. In fashion magazines. Holiday TV specials. What's next—a Super Bowl halftime smirkfest?

2000 should have been the end of The Smirk. His rock star career, which started in swingin' London during the late 1960s and peaked artistically in 1971 with Every Picture Tells A Story, skyrocketed with the disco craze. Eighties hip-pumping video hits strengthened The Smirk's sex-symbol status, before mid-90s adult contemporary ballads like "Have I Told You Lately" and "All for Love" set the standard for bridal music. By 2000, however, The Smirk was beginning to fade.

Human, released in '01, was his worst-selling U.S. album ever. A cross-country tour in support of Human received lukewarm attention at best. Newly separated from his record label (Warner Bros.) and his supermodel trophy wife (Rachel Hunter), The Smirk's future was suddenly smirking back at him: riverboat casino gigs sharing the bill with Fog Hat and Thin Lizzy; autographed leopard-print underwear sales on the cable shopping networks; nostalgia-fueled reunion touring with some Brits nobody's heard of; and the obligatory your-career-is-officially-over-now-off-to-bed lifetime achievement award.

Enter 2002. In an attempt to cleanse the skid marks left by his tumbling popularity, The Smirk teams up with music industry mogul Clive Davis who prescribes a total image make-over: bye-bye tired rock 'n' roller, hello sophisticated jazz crooner. Time to put away the DayGlo scarves. Mothball the neon spandex trousers. From here on out it's suit and tie formal attire for the world's biggest lounge act. Think of him as your haughty, harmless Uncle Rod who shows up on holidays, bottle-shaped microphone in hand, mauling Broadway show tunes.

And here's the kicker: The New Jazzy Smirk needn't know a thing about jazz. He doesn't have to compose a single note or write a single lyric—leave that to George Gershwin, Cole Porter, Duke Ellington, Johnny Mercer and other top composers and lyricists of the 1930s and 40s. All he has to do is sing their songs, the songs every jazz singer has sung over and over and over since they were written. ("It Had To Be You" has been recorded 567 different times; "As Time Goes By," 793 times; "Stardust," 1,935 times, according to a search on Allmusic.com.) Not exactly an original concept, but in the language of today's corporate music spindoctors "original" translates into "quirky," while "familiar" equals "double platinum."

I see trees of green, red roses too...

It Had To Be You... The Great American Songbook was released in November, 2002. It's a massive hit, debuting at #4 on the Billboard Top 200 album chart, and earning a Grammy nomination in the "traditional pop" (i.e. classic jazz) category. As Time Goes By... The Great American Songbook, Volume II debuted at #2 the following year. Another massive hit. Another Grammy nod. To date these two recordings have combined sales of over 10 million copies, nearly half the number of records Frank Sinatra sold throughout his entire 50-plus-year career. With these numbers and future sales projections, it's likely that in the next few years the Smirk will overtake Ol' Blue Eyes as the most popular jazz singer in history. 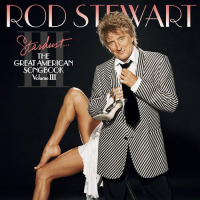 On October 23, 2004, Stardust... The Great American Songbook, Volume III debuted at #1 and sold 240,000 copies in its first week. A collection of jazz standards including "Blue Moon," "Embraceable You," "Night and Day" and Louis Armstrong's signature song "What a Wonderful World," Volume III is likely to become the largest selling vocal jazz record ever.

Due, in large part, to middle-aged women. The Smirk's unplugged appearance on Oprah in 1997 was reported to be a tearful screaming menopausal hot flash. "Stewart isn't singing these lyrics—he's having hot and steamy sex with them," writes Jessie Lilley, who maintains a webpage devoted to the "Great American Songbook" series. Hmmm—add "sloppy" and "out of breath" to Ms. Lilley's description and I'm inclined to agree—Uncle Rod interprets these classic melodies with all the subtlety of a Brahma bull in downtown Pamplona.

And while sounding, not surprisingly, like a rocker out of his comfort zone, the slam dunk success of a 60-year-old sex symbol singing 60-year-old love songs makes you wonder what else we can expect from our music industry puppeteers. Paul McCartney rapping Mother Goose? Elton John Homeland Security announcements? Mick Jagger lipping GPS locator instructions to the nearest onramp?

Meanwhile, The Smirk continues to rake in cash and pile up accolades. Stardust was nominated for another Grammy; a musical theater production of his 22 greatest hits, titled "Tonight's the Night," recently opened in London; and, in the ultimate gesture of commercial superstardom, MTV offered $45 million to turn his life into a reality show. Mr. Stewart respectfully declined, but told the World Entertainment News, with characteristic aplomb, "When I look at my household with my kids and dogs and dog shit, it's very, very similar to Ozzy [Osbourne]. Both of us have got this paranoia about dog poo." Classic. Even without the MTV deal, chances are you and I will be seeing and hearing a lot more of The Smirk in the coming years. "I think it's an impossibility to run out of these songs," writes Uncle Rod on his website. "I could probably make six albums of these songs quite easily."

And I think to myself, what a wonderful world...