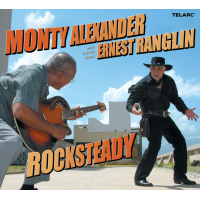 Monty Alexander’s totally idiosyncratic current release, Rocksteady , a conceptually confounding cross-breed of Jamaican ska, bluesy jazz, and the film scores of classic American Westerns, might have resulted in nothing more than a campy romp if Alexander and guest guitarist Ernest Ranglin weren’t the devilishly talented musicians they once again prove themselves to be.

This complex album blends personal nostalgia with a historical revisiting of time, place, and style. Building on their ability to seamlessly weave subtly crafted, insightful lines, Alexander and Ranglin create music that's equally enjoyable when listened to intently or placed in the background, a feat of no small order. Driven by the lilting push of reggae’s rhythmic feel, Rocksteady is heavily atmospheric, each of the twelve tracks dedicated to a similarly sparse ambience which evokes the pristine expanses of American western landscapes. Oft times haunting, Alexander and Ranglin’s lines raise images of long treks across threatening territory, brooding, silent heroes, and the oddly mystical power of the lonely desert. Album highlights include the delicately mournful ode “Marcus Garvey,” the equally sorrowful “Stalag 17,” on which Alexander contributes gorgeous melodica work, and the album closer, a brilliant rendition of “Redemption Song.”

Though at times whimsical, Alexander’s highly personal exploration of America’s western mythology, reggae, and the blues center of jazz succeeds in locating the source of all folk music’s power, the tension between loss and grace.