By MIKE PERCIACCANTE
December 6, 2008
Sign in to view read count 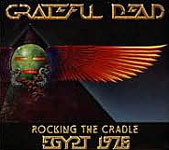 Marking the thirtieth anniversary of its historic 1978 concerts in Egypt, the Grateful Dead's two-CD/one-DVD Rocking The Cradle: Egypt 1978 documents the legendary performances in front of the pyramids at Giza. The CDs are compiled from performances recorded on September 15th and 16th, with the DVD taken from the September 16th show, during which there was a lunar eclipse.

The Dead's musical performance during these concerts was rumored to be less than stellar. Poor quality bootlegs seem to support this opinion but this official release entirely dispels the rumor. Though by no means The Dead's best live performances, Rocking The Cradle: Egypt 1978 is an enjoyable and sometimes dazzling concert album. It is different—unlike other released and unreleased Grateful Dead concerts—because the performance is out of the ordinary and unique. "Ollin Arageed," an Egyptian song that the band had never before performed features Hamza el Din and the Nubian Youth Choir. Keith Godchaux's piano is slightly out of tune during "New, New Minglewood Blues," creating a completely different feel, texture, shape and color. The electrifying performances of "Jack Straw" and "Stella Blue" are mystical, spacey and exquisite.

The recording is brilliant, featuring an amazingly clear and crisp mix where the separation of the instruments is breathtaking. It is possible to pick out Phil Lesh's bass lines and Bob Weir's rhythm guitar, as well as Godchaux's underlying keyboards.

Though a bit rough, the DVD provides some very interesting footage of the band behind the scenes and in concert, albeit with the feel of a home movie. The camerawork is a bit herky-jerky and in many places of amateur quality.

The collection also contains an informative booklet featuring many previously unpublished pictures and liner notes by Alan Trist, detailing the origins of the event. Packaged inside a digipak, when Rocking The Cradle: Egypt 1978 is opened, pop-ups of the Sphinx and pyramids are revealed.