By BRUCE LINDSAY
December 18, 2012
Sign in to view read count 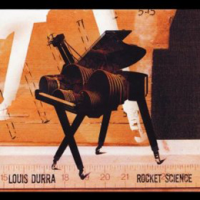 The constant revitalization of the piano trio is one of the most rewarding developments in recent jazz history and it continues apace with Louis Durra's Rocket Science. Durra isn't introducing a major paradigm shift, but with Ryan McGillicuddy on bass and longtime compatriot Jerry Kalaf on drums, he's bringing a few fresh new tunes to the party and delivering them with a light, engaging yet imaginative flair.

Rocket Science follows on from The Best Of All Possible Worlds (Self Produced, 2012) and consists, for the most part, of an intriguing mix of covers. Durra avoids the American Songbook classics, concentrating on more contemporary composers whose work is regularly adopted by jazz players—Stevie Wonder's "Living For The City," John Lennon and Paul McCartney's "Back In The USSR" and "In My Life"—and some who've yet to reach this status.

There's a pleasing variation in mood and pace. Jack White's "The Hardest Button To Button" gets a foot-stomping groove from Durra's left hand and Larry Steen's bass; Michael Buble and Alan Chang's "Home" is a melancholy ballad; Juan Villarreal's "El Mango" has a jaunty, up-tempo beat with a Vince Guaraldi cheeriness. Durra's "Nine Eleven," the album's sole original composition, is a lovely tune, performed beautifully by Durra with particularly sympathetic and respectful support from McGillicuddy and Kalaf.

Two of the album's most left-field selections leave the most lasting impressions. KT Tunstall's "Black Horse and the Cherry Tree" loses a little of Tunstall's assertiveness but gains a shuffling, funky feel from Kalaf's drums. The trio performs "Un Canadien Errant," a traditional song from Quebec, as a gently, wistful waltz with an occasional shift in pulse and emphasis that surprises without spoiling the mood—it also gives McGillicuddy the chance to take the spotlight with his own lyrical solo.

Durra, McGillicuddy and Kalaf play three or four nights a week around Los Angeles and this consistent work clearly helps them to knit together as a unit. Durra has also played some critically acclaimed shows at the Edinburgh Festival, not the easiest of places to make an impression. All this experience and expertise, coupled with Durra's inspired song selection, gives Rocket Science a special spark.

The Hardest Button To Button; One Love; Black Horse And The Cherry Tree; Home; El Mango; Nine Eleven; According To You; Living For The City; Back In The USSR; Un Canadien Errant; In My Life; La Puerta Negra.