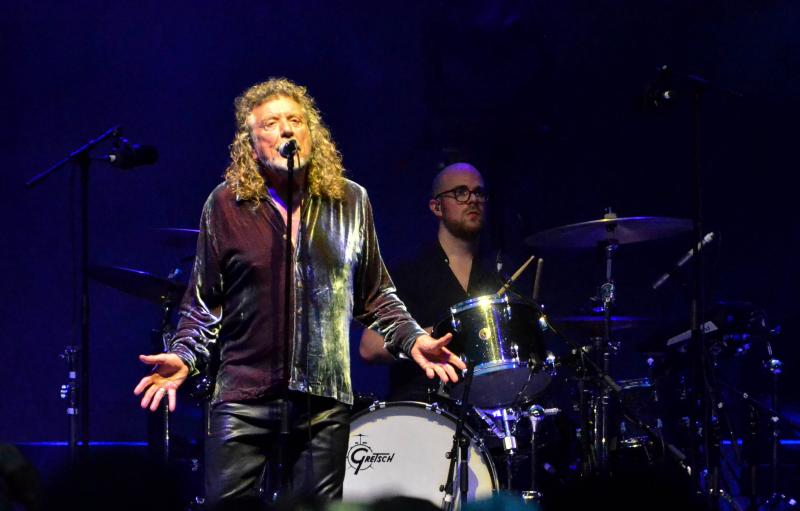 There isn't much that hasn't already been said about Robert Plant. Plant is regarded as one of the greatest singers in the history of rock 'n' roll. In the late '60s, along with drummer John Bonham, Plant formed the Band of Joy. Shortly after the band's formation, guitarist Jimmy Page plucked Plant and Bonham from that band to, with bassist John Paul Jones, become The New Yardbirds which soon became Led Zeppelin.

From its 1969 self-titled debut album (Atlantic Records) until Bonham's death in late 1980, one could argue that Led Zeppelin was the premier rock 'n' roll band on the planet. The band's sound drew equally from electric blues, early rock 'n' roll, folk-rock, hard rock, mythological lyricism, psychedelic rhythms and heavy guitar with a powerful backbeat. Plant's powerful vocal range helped the band reach heights that only a few other groups had and have attained.

Since Bonham's passing, Plant has authored a successful solo career while also recording with Jimmy Page and with Alison Krauss as well with The Honeydrippers. As a solo performer Plant has embraced psychedelic rock, roots, blues, African music, and traditional folk. He has received numerous Grammy nominations and continues to release new music. His Carry Fire CD, featuring eleven Americana drenched tunes, was released by Nonesuch/Warner Brothers Records in 2017.

Sheryl Crow is a nine-time Grammy Award-winner. During the course of her career she has released nine studio albums—seven of them reached the Top 10 on the Billboard charts. She has released the No. 1 hits: "All I Wanna Do," "Soak Up the Sun" and "The First Cut Is the Deepest." In addition, Crow has dropped over 40 singles into the Billboard Hot 100, Adult Top 40, Adult Contemporary, Mainstream Top 40 and Hot Country Songs charts. She is one of the best selling female artists of all time.

Seth Lakeman is an English folk singer, songwriter, and multi-instrumentalist, who is most often associated with the fiddle and tenor guitar, but also plays the viola and banjo. In addition to recording and touring with his two brothers (Sean and Sam), Lakeman has also established himself as a solo performer. Currently, Lakeman is touring with Plant as a member of the Sensational Space Shifters. After a somewhat rainy, cloudy and dreary day in New York, Lakeman was introduced to the Forest Hills crowd while many audience members were still finding their way to the seats. Working solo with only his violin, mandolin and acoustic guitar, Lakeman won over the crowd with his enthusiasm, powerful vocals, story-telling tunes and musicanship. By the end of his performance, the audience had taken notice. The applause and whistles following his last song were a clear testament to his talent and stage presence.

After a short intermission, Sheryl Crow bound onto the stage. Crow, who was clad in a denim jacket over a black t-shirt emblazoned with the word GRATEFUL, also wore skin-tight sparkly purple jeans and Converse All-Star sneakers. The 56-year-old singer/songwriter looked and sounded fantastic. Her set was an amazing mix of new and old material. She made a comment about "waking up and realizing that my first hit is 25-years old." Her ten-song set included "Can't Cry Anymore," "Everyday is A Winding Road," "My Favorite Mistake," "Strong Enough," "If It Makes You Happy" "Soak Up The Sun" and, of course, "All I Wanna Do." Toward the end of her set, Crow stated that "Robert Plant is the architect of rock 'n' roll." Her electrifying, upbeat performance ended as the sun began to set, and she exited the stage to thunderous applause. It was the perfect way to usher in the evening's headliner.

After a slightly longer than anticipated break, Robert Plant and the Sensational Space Shifters hit the stage. Plant, who will turn 70 years of age in late August, put the pedal to the metal from the very beginning with the bluesy "The Lemon Song." His show featured exactly what a 21st Century Robert Plant fan would expect and hope to hear—hard rocking and tasty guitar leads, folksy arrangements, Americana and blues riffs, West African rhythms, Eastern influenced string arrangements and that amazing vocal range. Highlights of the set included "Turn It Up" (which featured guitarists Justin Adams and Liam Tyson), "The May Queen" (from Carry Fire, a powerful take on "Gallows Pole," "Please Read the Letter" from the Raising Sand album (Rounder/Zoe Records, 2007), "Going to California" Babe, I'm Gonna Leave You," the Bukka White cover "Fixin' to Die" and the encores "In the Mood' followed by the medley of "Bring It On Home/Whole Lotta Love/Santianna/Whole Lotta Love."

Unfortunately, due to noise restrictions in the residential neighborhood in which the venue is located, the performance had a hard-stop at 10pm. The mostly middle-aged crowd remained glued to its seats, hoping against hope that an exception would be made. Sadly it wasn't to be. When the lights came up the audience slowly and reluctantly made its way out of the venue, toward the merchandise stand and ultimately the street.

Plant's performance was a revelation. Even after almost fifty years, the man can still sing. He can hit the high notes, can make fans feel as though they've gone back in time and still bring it with the best of them.