By C. MICHAEL BAILEY
July 8, 2011
Sign in to view read count
The jazz piano trio—piano, bass, and drums, also known as the "rhythm section"—is a fundamental unit in jazz ensembles. It is the motor that drives all combos greater than itself. Which instrument a trio "leader" plays often has a profound effect on the personality and temperament of the music produced. Bass-led trios often bring the bass out from behind the piano to play a more central melodic role in a performance. Paul Chambers liked to have his bass playing front and center with the piano, while Ray Brown typically positioned himself between the piano and drums of his numerous combos. Robert Hurst comes from the Chambers mold, expanding the bass' role in the trio from time keeper to stylistic foil to the piano.

Detroit-native bassist Hurst introduced himself as a member of the 1980s jazz ensemble Out Of The Blue, and then by collaborating with drummer Tony Williams, pianist Mulgrew Miller, singer Harry Connick Jr., pianist Geri Allen, guitarist Russell Malone, and bassist Steve Coleman. He fully came into his own during a 1986-1991 stint with trumpeter Wynton Marsalis, the same band hosting pianist Marcus Roberts and drummer Jeff "Tain" Watts. Hurst has remained busy in the studio and the bandstand, assembling two volumes of live material recorded in 2000 and 2007 respectively. 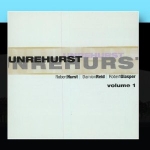 Hurst's first trio outing with the then relatively unknown pianist Robert Glasper and drummer Damion Reid is a performance-pure, sonically challenged affair. Details regarding the venue are scarce, though the room sounds moderately small. Hurst and Glasper sound neck and neck with the drums slightly muted, the shine attenuated somewhere in the capture or engineering. Despite the murkiness of the sound, Unrehurst, Volume 1 delivers a powerful punch musically.

Volume 1 is made up of seven Hurst or Glasper originals. The pieces are well integrated and lengthy with the shortest clocking in at 5:00 and the longest at 14:20. The playing is inspired and often exceptional. Glasper is an iconoclastic pianist who pushes the envelop in a Don Pullen sort of way without the Cecil Taylor bombast. Glasper actively incorporates a greater freedom into his playing without losing his focus. He plays a perfect foil for Hurst, who prefers a stricter timekeeping, though even his time is relative and elastic. 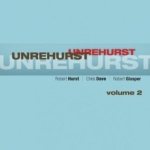 Unrehurst Volume 2 was recorded five years after Volume 1, in 2007. Hurst heeded criticism of the muddy sonics of the first volume, recording Volume 2 cleanly and acutely. Again, this set is made up of lengthy considerations of two standards and three originals. Opening the very abstract "I Love You," Hurst morphs Cole Porter's chords into A Love Supreme-like mantra. Glasper plays abstractly, more by insinuation that frank statement. The musicians make the listener pay attention for the key musical landmarks, rewarding such to revealed facets of the songs.

Hurst's own "Bob's 5/4 Tune" is beyond angular, echoing the odd time signature of another, earlier tune in Paul Desmond's famous "Take Five." Glasper, here, rises to Hurst's challenge, turning out a compulsively creative solo section. Leave it to this band to turn "Monk's Dream" on its already bent ear. Glasper fairly hides the familiar theme, approaching it from an almost introspective direction, and in doing so achieves a certain tension in the otherwise overtly hard bop environment. This is a very interesting and forward thinking trio outing.