By KARL ACKERMANN
August 29, 2018
Sign in to view read count 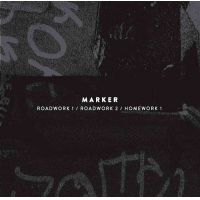 Reed player, composer and improviser Ken Vandermark has led, or been a part of, more than fifty different groups in his prolific twenty-year recording career. Along the way he has played with many of the top talents in experimental, free, and avant-garde jazz, including Joe McPhee, Joe Morris, Paul Lytton, Marcin Oles, Adam Lane, Ab Baars, Barry Guy, Paal Nilssen-Love, Augusti Fernandez, Tim Daisy, Nate Wooley, Dave Rempis, Sylvie Courvoisier, and Paul Rutherford. He formed his most recent group, Marker, in 2016, releasing their debut Wired For Sound (Audiographic Records) the following year. Roadwork 1 / Roadwork 2 / Homework 1 is an ambitious new three-CD Box Set from this Vandermark collective.

A Chicago fixture for twenty years, Vandermark did not need to go far in assembling the personnel for Marker. That city's always robust music scene is home base for each of the four young players filling the quintet. Guitarist Andrew Clinkman's focus is experimental and improvised music. He plays in a number of local groups, across genres and has released a solo guitar project, The Joy Of Cooking (Lake Paradise Records, 2015). Guitarist, improviser, and composer Steve Marquette shares a similar background, plays in a trio with Marker keyboardist and violinist Macie Stewart, and leads his own quartet. Both Clinkman and Marquette are involved with other Vandermark projects as well.

Just twenty years of age, multi-instrumentalist Stewart has already appeared on national television and played the Lollapalooza and Coachella festivals, receiving coverage in major publications. Having originally studied piano, she is also a guitarist, singer and composer but focuses on keyboard and violin with Marker. Drummer and teacher Phillip Sudderberg is known to experiment across the drum set's colloquial and unprescribed patterns, informing his theories through extended techniques and applying his practices to rock and jazz.

Each of the compositions was written by Vandermark, but at three hours in total length, improvisations and invention are the order. "Accordeon"—the French variation of the spelling—begins disc-one and in its fifteen-plus minutes opens a window to the tone and tenor of what is to come. Stewart's keyboard, approximating a sound somewhere between an organ and an accordion, sets an ominous tone. Vandermark's saxophone synchronously eases its way in before exploding in a fiery improvisation. The left and right sides are then filled with choppy chords and rapid-fire notes from Clinkman and Marquette before Stewart and Vandermark re-enter the fray. About ten minutes in, the piece turns abruptly; violin and guitar play introspectively, joined by Vandermark—now on clarinet—to the conclusion. Throughout the piece, Sudderberg masterfully manages a dizzying array of changes.

"French Dress" is more abstract overall but in the late stages, the guitars give this piece a hard rock feel. Vandermark's tenor adds a grainy, off-kilter post-bop texture at the end. "Sali Da," "Detour" and "B Movie" incorporate similar elements but the rock component varies in intensity with each, seeming to reflect different eras of punk/post-punk music. Other compositions such as "Shunpike" and "Deguchi" are grunge/electric/jazz amalgams that seem to endlessly shift identity. "B Eiga," the concluding piece of the third disc, wraps things up much as they began; the instrumentation may have distinct personality in this piece but it retains the complex, visceral qualities that dominate the collection.

Whether Vandermark is incorporating past references or new and unfamiliar musical elements, the spirit of experimentation is always perceptibly current. As one would expect—if they are familiar with Vandermark's work—there is little that is intended to be comfortable in this collection. Though he has offered releases that are more user friendly, such as his work with the Resonance Ensemble, or Chicago Volume (Smalltown Superjazz, 2009) and his terrific Joe Harriott Project, Straight Lines (Atavistic, 2006), Vandermark can be more readily counted on to create provocative and uncompromising music that, while cerebral, is often volatile. He does so extremely well on this collection.

Roadwork 1 / Roadwork 2 / Homework 1 was initially offered as a limited-edition CD set but is now available only in digital format. Each of the discs has multiple sub-titles (as if things weren't complex enough). Chronologically, they are Roadwork 1: New Orleans (for Ed Blackwell, Irma Thomas, and Allen Toussaint), Roadwork 2: Atlanta (for James Brown, Marion Brown, and Mary Lou Williams), Homework 1: Chicago (for Muhal Richard Abrams, Curtis Mayfield, and Dinah Washington). The liner notes offer no further explanation of the dedications so they are taken at face value.