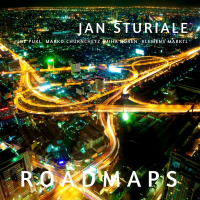 Italian born, New York-based guitarist Jan Sturiale wastes no time on his latest record, Roadmaps; from the first notes of the opener it's evident that everyone on the record, which was cut in just one day, came ready to push the compositions to their limits. Sturiale writes tunes that are complex, but they develop organically and leave plenty of room for players to add their voices.

Throughout the record Sturiale's tone evokes Pat Metheny and Kurt Rosenwinkel. Undoubtedly this modern player has taken cues from these masters, as well as from his teachers Tim Miller and Ben Monder. Several compositions are in the vein of those from Rosenwinkel's groundbreaking record The Remedy (WOMMUSIC, 2008). "Full Moon" and "Major Suspension" are good examples of this. Likewise his his emphasis on unique chords like those featured in the brief vignette "intro" may remind some of Monder's breathtaking chord-work.

However, the real star of the record is the band. Sturiale notes of his relationship with saxophonist Jure Pukl, "I started playing with Jure back in 2011 and we did lot of gigs together in these years so I decided to put together a band with him and go into the studio" The chemistry and interplay bring new depth to the already engaging compositions. As they explore various moods, textures and tempos, often within the same tune, they act as a unit serving the melody or soloist as needed. This allows straightforward covers, like their take on Peter Gabriel's Mercy Street to remain interesting despite having few defining changes in the arrangement.

Fans of John Scofield will find much to like about this record. The modern sound can be compared to records like Works For Me (Verve, 2001), which is to say it plays it relatively safe, rhythmically speaking, in the best of possible ways. The groove is never lost, and you'll always be able to tap your foot to it.