By DAN BILAWSKY
January 9, 2012
Sign in to view read count 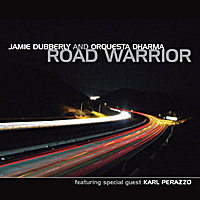 When trombonist Jamie Dubberly moved from New York to northern California in 2003, he immediately became ensconced in the burgeoning Bay Area Latin jazz scene. While he sharpened his performance skills by playing in bands like Avance and Louie Romero's Mazacote, these groups also inspired him to put pen to paper and explore the lexicon of Latin jazz in a more personalized manner. Three-and-a-half years in the making, Road Warrior is the result.

While this release marks the leader debut for Dubberly and his Orquesta Dharma, the music never betrays this newcomer status. The group performs with the aplomb and assurance of a well-oiled machine and, with a frontline of trombone and tenor and baritone saxophones, there's an immediate and unique aural fingerprint. While flute pops up on a pair of tracks, the absence of higher voices elsewhere, like trumpet and alto saxophone, gives the frontline a solid-bodied, centered sound that doesn't come off as bright as many Latin bands. Dubberly, tenor saxophonist Pete Cornell and baritone saxophonist Darren Smith blend well, and if each is given plenty of opportunity to shine in individual solo spots, they rise to the occasion and outdo themselves when constantly passing the baton and egging each other on during "Elsa's Blues," which proves to be an album highlight.

The other musical elements in the mix, which include a percussive party down below, with piano and bass filling out the group, are par for this course; yet still provide plenty of thrills along the way. Santana-associated percussionist Karl Perazzo gets big-time billing on the cover of this disc, but he only appears on two tracks, and the heavy lifting is really accomplished through collaborative rumble-making from drummer Brian Andres and percussionists Carlos Caro, Mario Flores, Omar Ledezma, Jr. and Silvestre Martinez, who appear in various combinations throughout. While steady eighth note percussive underpinnings mar the otherwise gorgeous "I Saw You (In My Dream)," their presence is welcome, enhancing the music at every other turn.

Dubberly's own songs provide a glimpse into the inner workings of his mind, but his twist on the work of others is eye-opening. He uses bubbly electric bass and rhumba clavé to underscore his take on Wayne Shorter's "Footprints," sets "Caravan" adrift with some rhythm section work that sounds more like a setup for "A Night In Tunisia," and gives a funky-smooth sheen, which is a bit of an acquired taste, to the borders of Steve Davis' "The Slowdown." Dubberly also manages to reference some other classics, like Nat Adderley's "Work Song" and "Salt Peanuts," in quick fashion during his originals.

Dubberly's broad 'bone sound and arranging/composing skills, along with key contributions from his large cast of collaborators, help make Road Warrior a fun listen from start to finish. Hopefully, it won't take as long to make the follow-up.