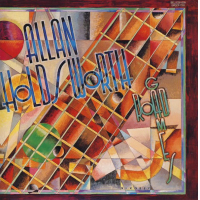 Short but sweet . . . This 24:17 length re-release, never before on CD, 80's era solo effort originally appeared as an EP, (extended play), vinyl release. It is a unique mix of great vocals with a more rocking, bluesy jazzy, quasi-mainstream, song-themed, balladic thrust. This release showcases Holdsworth playing less “out there”. Don't get me wrong — the guitar is amazing, multi-voiced, fusion-fired, ethereally chorded, delightfully crystalline-clear-note flourished, and swooningly embellished. Then add in the vocals of Jack Bruce for that “Cream” flashback or the I.O.U. band feel of Paul Williams' crooning, back-to-back with killer bass by Berlin and tastefully poised drums by Wackerman and you have fusion-rock bliss.

Holdsworth addicts have waited a very long time for this to appear on CD format. So go for it. I was glad to see it happen but I bet many out there already had this on vinyl-to-CD-R copies at home. I did. Time to get the real deal folks. It sounds great all over again. Orignial album cover graphics and notes are included.

Three Sheets To The Wind, Road Games, Water On The Brain - Pt. II, Tokyo Dream, Was There?, Material Real