By JAKOB BAEKGAARD
May 15, 2013
Sign in to view read count
Many of the compositions on the album are associated with Frank Sinatra and one of his most prominent arrangers, Gordon Jenkins, provides the title track whose sweeping harmonic landscape, imbued with bittersweet nostalgia, is a suitable way to end the session.

Recently, Justo Lo Prete has taken a liking to solo piano recordings, and with a solo record by pianist Paula Shocron in the pipeline, that passion is guaranteed to continue, but he also has a soft spot for piano trios and with Ernesto Jodos' trio, he has recorded one of the best.

Pianist Jodos is one of the most prominent figures on the jazz scene in Buenos Aires and has won numerous awards and played with the likes of Billy Harper, Chris Cheek and Ingrid Jensen. He is also the director of the jazz program at Superior Conservatory of Music Manuel de Falla.

All these accolades aside, what really comes across on Light Blue, his record with bassist Jerónimo Carmona and drummer Pepi Taveira, is the unspoiled joy of playing music together. Like the title implies, the touch is light and swinging, but with a shade of blue.

Strong, but lesser known gems from Charlie Parker ("Dewey Square") and Thelonious Monk ("Light Blue") sit well next to tried and true standards like "Wrap Your Troubles In dreams" which is played in an unconventional version where the piano at times sounds like a gong from an ancient temple. It is also refreshing that the rarely heard pianist-composer Herbie Nichols is dug out on an elegant interpretation of "Step Tempest" where Nichols' composition benefits from the light swinging touch of a trio that could be described as playful modernists. 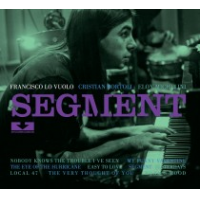 Pianist Francisco Lo Vuolo isn't as well-known as Ernesto Jodos or Paula Shocron, two of the label's most prominent musicians, but he is a rising star that Lo Prete believes is one of the greatest jazz piano talents in Argentina.

Segment, his trio album with bassist Cristian Bortoli and drummer Eloy Michelini, offers ample proof of Lo Vuolo's skill as an improviser, interpreter and leader. His idiosyncratic versions of old warhorses like "Yesterdays" and "My Funny Valentine" are nothing less than stunning.

Those familiar with Ben Webster's tender reading of Jerome Kern's ballad might be surprised when they hear his up-tempo version that brings in a fountain of melodic ideas in the middle of an infectious groove driven by Michelini's dynamic playing on the ride cymbals.

Vuolo's solo piano exploration of "My Funny Valentine," which closes the set, isn't as controversial as his take on "Yesterdays," but it adds some interesting harmonies and finds its way into the emotional core of the tune where a fragile beauty is allowed to blossom.

The strength of Segment isn't only that it finds a poignant urgency in melodies that have been played many times, but it also digs out some lesser known jewels like the title track, a free-wheeling bop-groove penned by Charlie Parker, and the swinging elegance of "Local 47" that highlights the compositional skills of unsung saxophonist Warne Marsh.

Whether exploring well-trodden pathways or the roads less travelled, Segment shines with true musicality and improvisational adventurousness. It's only a matter of time before Lo Vuolo will be part of the big league. 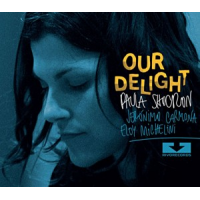 Pianist Paula Shocron has taken lessons with Ernesto Jodos and she shares his elegantly swinging touch, but has developed her own voice and her natural musicality can be enjoyed on Our Delight, her first trio outing on Rivorecords.

The title track is penned by Tadd Dameron, who has been called the "romanticist of the bebop movement," but there isn't anything slow or contemplative about the propulsive rhythms conjured by Shocron and her cohorts. However, there is a chance to hear the softer side of Dameron in a gentle interpretation of "Soultrane" where bassist Jerónimo Carmona provides a well-structured solo.

Shocron is classicaly trained and came relatively late to jazz, but it's hard to believe she wasn't born a jazz musician. The music pours out of her effortlessly and her lines have a singable quality that makes her improvisations a joy to follow.

It also helps that Carmona is just as strong a melodic capacity as Shocron. He is the deeper current behind her melodic motifs and drummer Eloy Michelini's superb playing on the cymbals and toms is the epitome of swing. On Irving Berlin's classic "Change Partners" he takes some sly cues from Vernell Fournier and cooks up a simmering rhythm that brings out the best in the song.

It all ends with a soliloquy. Shocron alone at the piano playing Duke Ellington's "Melancholia" and there is, indeed, a certain sadness when a lovely record like this has to end.

Serenade in Blue sees the return of Shocron's trio, but this time around, bassist Jerónimo Carmona is replaced by Juan Manuel Bayón. Fortunately, this doesn't change the chemistry of the trio. Eloy Michelini still works wonders behind the kit and Shocron's melodic gifts are undiminished.

From the first note of Duke Pearson's "Jeannine," the trio's sound is instantly recognizable. The inspiration from pianist Ahmad Jamal's famous trio with drummer Vernel Fournier and bassist Israel Crosby is perhaps even more clear, but there is also a little Latin flourish in the ticking rhythms of "Nica's Dream," originally penned by Horace Silver, and the title track offers the kind of deep lyricism associated with Bill Evans, with broad, crystalline harmonies, adding a touch of Casablanca-nostalgia.

With its fast runs across the keys "Fine and Dandy" might as well be called "Fire and Dandy." The trio definitely burns in a cool manner and Michelini delivers a short, but inspired solo while Bayón plays walking bass patterns.

"SP" offers a welcome chance to hear an original composition and is a lovely mid-tempo melody with echoes of Horace Silver. The bass introduces the pulse of the song and Shocron slowly builds momentum and lets the music unfold. Serenade in Blue ends on a solemn note with a blue ballad, "The Star-crossed Lovers," underlining why a solo album by Shocron would be a treat.

Paula Shocron's trio from Our Delight resurfaces on Warm Valley where trumpeter Mariano Loiacono shares the bill with Shocron as co-leader. Like Shocron, Loiacono has a background in classical music. He studied with Fernando Ciancio, one of the most prominent trumpet-players in classical music and then turned to jazz at the age of 21. Since then, he hasn't looked back and has become a respected jazz musician, who is an important part of the vital jazz scene in Buenos Aires.

On Warm Valley, Loiacono sticks to the flugelhorn and the warm richness of the instrument is the perfect counterpart to the airy expression of the trio. The musicians kick off with "Bird Song," Thad Jones' homage to Charlie Parker, where the unison lines of piano and brass burn with the energy of bop.

Then follows Paula Shocron's "Elvin," a relaxed swinging piece that introduces guest-musician Sebastián Loiacono, who also spins some crisp balladic lines on "The Nearness of You" where the spirit of Ben Webster is revived.

The repertoire, as usual with Rivorecords, mixes the occasional original composition with familiar and less played standards. "Warm Valley," like the title implies, is a warm landscape of sound where Loiacono's skill as a balladeer comes to the fore with a Chet Baker-like sensitivity and the melody is certainly one of Duke Ellington's gems.

Good melodies, a strong guest appearance and fine solo spots from two of the finest artists of Rivorecords. This sums up Warm Valley.

Compared to the mellow beauty of Warm Valley, Loiacono's session as a leader for Rivorecords is a much more fiery affair. The opener "It's You Or No One" is a case in point, with its high-octane rhythm and muscular duels between Loiacono and saxophonist Gustavo Musso.

Adding alto saxophonists Sebastián Loiacono and Ramiro Flores on an interpretation of Nat Adderley's "Work Song" almost gives a feeling of big band and the musicians blow their horns with passion. However, it doesn't take more than Musso and Loiacono to make the music hot and pianist Francisco Lo Vuolo also plays with great sensitivity and zest.

Justo Lo Prete's belief that it is possible to combine spontaneity and careful arrangements is proven on this session, which has all the charm of a blowing session and the sustainable quality of a work of art. "What's New?" The title asks and one could be tempted to answer "not much," but in the world of Rivorecords this is certainly a good thing. Here's a deep respect for the American hard bop tradition that avoids the pitfalls of pastiche. 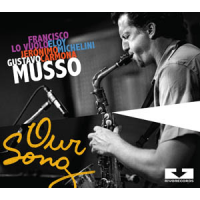 In a way, the whole catalog of Rivorecords is a tribute to the American tradition of standards and the way they were stretched and enchanted on the jazz labels of the 50s and 60s. As Justo Lo Prete says: "I like classic labels in the vein of Riverside, Prestige, Contemporary, Pacific Jazz and certainly Blue Note."

Gustavo Musso's record Our Song is a homage to the most important artist that recorded for Lester Koenig's Contemporary label: Art Pepper.

Musso plays in a quartet with pianist Francisco Lo Vuolo and the rhythm section from Paula Shocron's trio: bassist Jerónimo Carmona and drummer Eloy Michelini and, of course, he plays alto saxophone throughout the whole session.

There's only one composition by Pepper, which is the title track, and one could have hoped for a version of a signature Pepper-ballad like "Patricia," but instead Musso chooses to spread his Pepper-stardust on standards like "Here's That Rainy Day" and "Lover Man" and it's almost uncanny how closely he can resemble Pepper's adroit phrasings and the cool fire of his tone. Like Pepper, Musso knows that good music should tell a good story and this is also the case in general for Rivorecords. When all comes to all, there's no need to intellectualize it more than necessary or as Justo Lo Prete says: "just listen to the music and enjoy it. Keep things simple. Just jazz standards; no science behind."

There might not be a lot science behind the music, but it certainly has body and soul. Rivorecords is all about classy packaging, superior sound and tested material interpreted by true artists. It's the classic sound of Blue Note coming from Buenos Aires.

Tracks: Soul Eyes; Everything Happens To Me; Whisper Not; Danny Boy; When You're Smiling; Fly Me to the Moon; In The Wee Small Hours of the Morning; I'm Getting Sentimental Over You; Up Jumped Spring; Goodbye.