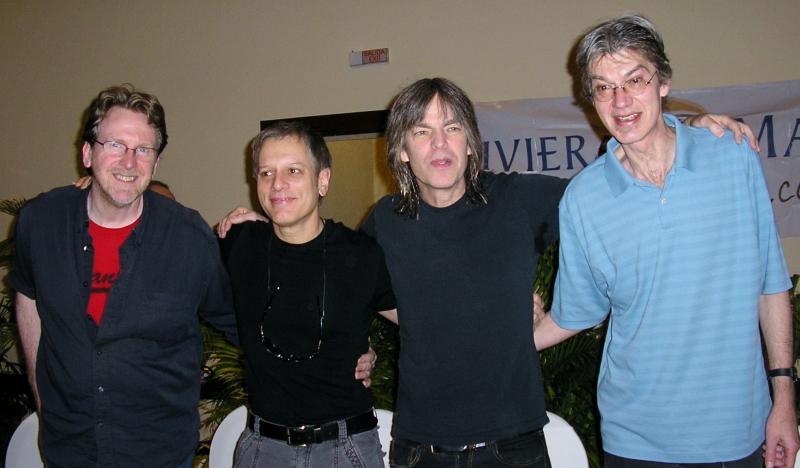 In the language of their spoken words during the pre-performance press conferences, and in the language of music through their concerts, the performers at the 2010 Riviera Maya Jazz Festival spread the message of love and respect throughout the beaches and skies of beautiful Playa del Carmen.

The opening bill on Thursday, November 25, paired guitarist Mike Stern and Dave Weckl, named "one of the 25 best drummers of all time" by Modern Drummer's Hall of Fame, together in an electric quartet with bassist Tom Kennedy and tenor saxophonist Bob Malach. Kennedy and Weckl, who grew up near each other in St. Louis, have worked in rhythm sections together for the past twenty-five years.

In their pre-concert press conference, the guitarist and drummer considered why they each play so well with the other. "Dave and I have similar eclectic tastes. It doesn't have to be just traditional jazz. We can both mix in stuff like funk and blues," Stern explained. "Dave can play straight-ahead jazz in a very traditional way. He can swing his ass off! Plus, I love the way that Dave has an instinctive way of playing the form of a tune." For his part, Weckl explained that he liked playing in this Stern band precisely because they really don't need a drummer; his band mates have such a solid sense of time that he doesn't need to lead them or follow them—he can play alongside them.

Although Stern has received six Grammy nominations for the jazz-fusion explorations of such studio recordings as Between the Lines (Atlantic, 1996), which also features Weckl and Malach, his music in live performance becomes an entirely different animal that prowls and roars onstage.

In concert, it's quite evident that Stern's guitar playing is rooted deeply in the blues, no matter how varied the fruit that grows from it. On several tunes, Stern and Weckl instrumentally conversed in duet passages that eloquently refined the blues with different shades of Latin, rock, and Brazilian music, and each member of this quartet took a turn sitting out to give the remaining trio extra improvisational space. Malach's solos often skirted the boundaries, and at other times pulled gut-bucket R&B and funk threads out of Stern's spacious arrangements.

One of Brazil's most prolific and enduring modern composers, Ivan Lins' headline spot on Thursday's bill was a Riviera Maya Jazz Festival return engagement. "The first time I came here was really, really amazing. I love the energy of this festival. It's a gift to me to be surrounded by friends and by the energy of this festival," he said before his performance. "This place is extraordinary." 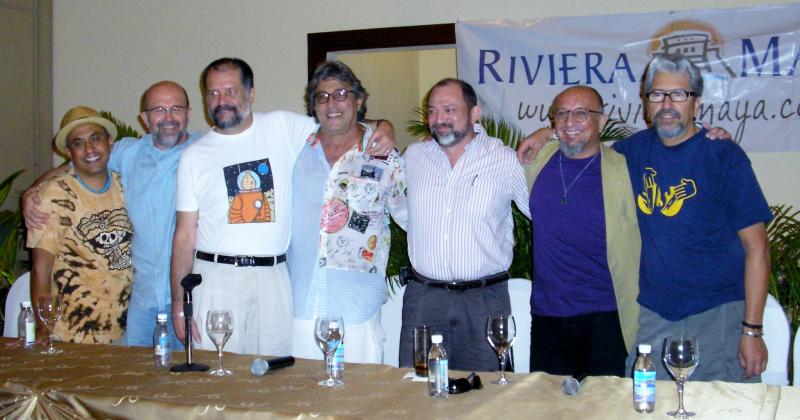 Lins and friends, especially soloists Marcelo Martins on saxophones and pianist Toussaint (to whom Lins deferred almost every keyboard solo), delivered a performance that proved it. "Everybody sings this song in Brazil," he explained in introducing Antonio Carlos Jobim's "Samba do Avio," which shifted like a delicate wave into a tune by Milton Nascimento, together weaving a beautiful soundtrack for the moon rising over the Caribbean and unfurling a lush, comforting blanket of Brazilian melodic beauty. Lins closed his set with "Birdland," foreshadowing the The Manhattan Transfer's upcoming headline performance at the festival on Saturday, November 27.

The Hiram Gomez Band, led by Mexico's pioneer six-string electric bassist, was the festival's first act on opening night. Composer/arranger Hiram Gomez served as bassist for more than 70 vocalists before embarking as the leader and bass catalyst of his own jazz band; his current sextet features local musicians from Cancun and elsewhere, with whom he recorded the band's Hold Down the Groove (Self Produced, 2010.)

Before the show, Gomez said he looked forward to performing his new material onstage. "In the studio, everything a musician does needs to be very clean," he said. "Live, things don't need to be so clean and you can sort of let things happen." His electric six-string delivered powerful low tones that simultaneously laid the foundation and rocked the opening tune, Hold Down the Groove's title track. Gomez introduced Caribbean reggae rhythms into a later tune, and sang along to his melodic solos in "Ocaso," backing his own vocal with his bass, dancing in the Latin jazz fusion spirit.


Thanks to the Riviera Maya, Mahekal Beach Resort, Mamita's Beach Club, and Turner PR, for their assistance with this article.