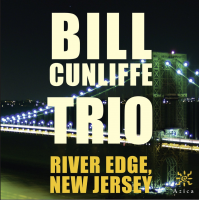 River Edge, New Jersey is like a trip down memory lane for pianist Bill Cunliffe. The California-based ivory tickler looks back to his days as an East Coast resident, teaming up with two highly capable, once-upon-a-time colleagues—bassist Martin Wind and drummer Tim Horner—who call New Jersey home. He further taps into the nostalgia well by visiting songs from his youth (Harry Nilsson's "One") and material expressly written in honor of those who have had a strong impact on him over the years. All of the topics at hand were essentially born of the past in some way, shape or form, but the music is remarkably present in all respects. Cunliffe doesn't try to remake a memory or recycle any past successes; he simply plays himself in the here-and-now.

In teaming up with Horner and Wind, Cunliffe winds up with the perfect rhythm section to support his work. They bring a light-and-funky feel to "Sweet Andy," support "Blue Notes" with swinging insouciance, hit all the feel-shifting marks on "You And The Night And The Music," and rock out on "One (Is The Loneliest Number)." Wind winds his way through Cunliffe's work, proving to be an interactive presence throughout, and Horner's sensitive ride touch adds grace to the music ("For Wanda").

Cunliffe's compositions cover all of the bases, as he visits waltz territory ("What Might Have Been"), touches down in Brazil ("Choro (From Nostalgia In Corcovado)"), swings through ("Blue Notes"), and goes the tender route ("Erik's Song"), but his covers are the real head turners. He follows trends and sees positive results by finding his way into Björk's songbook ("All Is Full Of Love"), but that's not the best of the covers; that honor belongs to "The Girl From Ipanema." He manages to get something new out of that overripe song, delivering what may be the most pleasing version to be heard this side of the bossa nova craze. Slight metric adjustments add new wrinkles to this old tune without distorting its true nature, and Cunliffe enlivens things with bright harmonic colors.

Cunliffe may live on the West Coast these days, but the East still owns a bit of his musical soul; that much is made clear by the end of River Edge, New Jersey.

Sweet Andy; The Girl From Ipanema; Blue Notes; For Wanda; You And The Night And The Music; What Might Have Been; One (Is The Loneliest Number); Choro (from Nostalgia In Corcovado); All Is Full Of Love; Erik's Song.