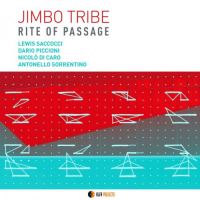 There is much to like about the Italian group Jimbo Tribe's album Rite Of Passage. The trio of pianist Lewis Saccocci, bassist Dario Piccioni, and drummer Nicolò Di Caro are joined by guest trumpeter Anotello Sorrentino, and the quartet offers up imaginative twist after turn. The compositions are engaging and exciting. Changes are planned but feel spontaneously executed. The melodies are—in a word—beautiful. It is as if one were standing alone in the Ufizzi Gallery, lost in the reverie of Botticelli's The Birth of Venus.

Four of the eight numbers are penned by Saccocci, three by Piccioni, and the trio also covers Miles Davis's "Nardis." The arrangements give each musician room to shine while the group's tight yet loosely interwoven technique keeps things fresh.

Saccocci's piano has a Chopinesque feel similar to Chris Gall or Christian Pabst. He typically repeats lyrical motifs with embellishments and variations that provide distinct color to the tunes, like on his number "Il piramidale." Sorrentino offers up relaxed yet powerful statements on trumpet. There is a soaring quality to his playing that lifts the music to new heights; for example, on"Sole Bianco," Sorrention's solo is like an early morning view atop a mountain. Bassist Piccioni contributes assertive counterpoint. Take the magic he creates on "Road to Edessa" and his playful banter with Saccocci on "L.S.S.R." Or his effort on "Nardis," which gives the standard a mysterious twist. Drummer Di Caro also adds powerful yet understated transitional elements. His flourishes at the end of "L.S.S.R." and the funky "Turchese" show off his all-over yet controlled drumming.

So, just what kind of rite of passage is this? Is it one that sweeps out like a grand terrace overlooking the hills and golden fields of Tuscany? Is it a slow gondola ride through the canals of Venice in the early evening, where one wonders just what architectural gem lies around the next corner? Is it one found in the nostalgia of old photographs? Whatever one conceives, it is a passage well worth taking.