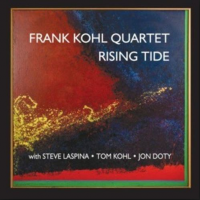 Guitarist Frank Kohl releases his fourth album as a leader, entitled, Rising Tide. The Seattle-based guitarist is joined by bassist Steve LaSpina, pianist (and brother) Tom Kohl, and drummer Jon Doty. Kohl penned five of the eight tunes, with the balance pulling from the standards repertoire.

Kohl's guitar sound is warm, clear and sounds as a "box" guitar should, lending to a delightful jazz guitar authenticity. The group has a tight interplay and a palpable joy in performing together. Kohl musically uses his advanced technique and turns in excellent performances developed through sophisticated improvisational elaborations—highlighted by his bandmates. Kohl's "Rock and Roll" references the cool jazz era, while its bop-tinged flights of fancy suggest that Kohl has deeply studied that era too for inspiration. Kohl's lines float over the medium beat tempo selection; Doty provides rhythmic focus and Tom's accompaniment is sensitive and supportive. The highly articulate playing style of Kohl always lets the listener know where his lines are going and the result is a nourishing listen.

Kohl also adds bop-ish flourishes to the standard "My Romance." He evolves his solos nicely and is indicative of the fifties jazz style. LaSpina's bass solo recalls the nimble methodology of Scott LaFaro and Eddie Gomez with a combination of upper register surges and fast ably played lines. Tom's solo is relaxed and builds upon melodic fragments from the melody that are worked through the harmonic changes as he builds the intensity and register to form his musical story. The album ends with Kohl performing a solo version of "Beautiful Love." Kohl keeps the momentum moving forward with lyrical counterpoint lines between the upper and lower register, which then are alternated with well-placed chords. The piece is a sterling example of Kohl abilities on the guitar.

Rising Tide features a hard-swinging band with tuneful playing by all. The disc is a highly satisfying collection of originals and standards. Kohl has an allegiance to preserving jazz through incorporating new musical influences, while maintaining high musical standards based in the tradition. Which adds up to a solid listen.