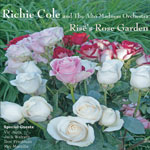 There's often more in a package of music than meets the eye—or ear. I don't know how difficult it must have been for saxophonist Richie Cole to produce this album, but I can imagine. The Risë in the title is Cole's wife, who passed away last April, only a few weeks before the album was recorded. Risë Cole was fifty years old. One of Risë's—and Richie's—greatest pleasures lay in tending the rose garden that surrounded their home in Ewing Township, New Jersey. Richie had already written the song "Risë's Rose Garden for his wife, thus giving the two-disc set its somber yet suitable name.

In spite of the unhappy circumstances encircling the session, the mood is decidedly upbeat, and one scarcely glimpses the sadness that must have been in everyone's heart. Cole is the same gregarious player he has always been, and he shares space so generously with other members of the AMO that only the name on the marquee (and the fact that he arranged every tune) affirms his status as leader of the band. The core group is reinforced by the presence on several tracks of a number of talented guest artists—pianist Don Friedman, guitarist Vic Juris, trumpeter Jack Walrath and percussionist Ray Mantilla.

Friedman, who plays on all but one selection, is especially impressive, both soloing and comping, as is Juris, whose warm single-note lines adorn eight tracks. Walrath, who is more at home in a cerebral environment, seems somewhat less sure of himself on the level terrain as he searches for a comfortable groove on four numbers. Mantilla's percussion underscores drummer Wayne Dunton on "Nightfall (disc one) and "Ewing Cha Cha (disc two). Cole really cuts loose only thrice, on the standard "There Will Never Be Another You —on which he is backed by Juris, Dunton and bassist Rick Crane—and his own compositions "Mr. Everything and "Psycho-la-Tron. His other solos are relatively concise, as are those of tenor saxophonist Bobby Howell, trombonist Rick Stepton, and trumpeters Nathan Eklund and Chris Jaudes. Juris is showcased on the samba "First Bloom, Friedman on "Speak Low and the venerable Eddie Heywood favorite, "Canadian Sunset.

"Bloom, one of nine originals by Cole, is among three with Latin roots (the others are "Nightfall and "Ewing Cha Cha ). Every one of his themes is of more than passing interest, especially the flag-wavers "Three East and "Psycho-la-Tron, both on disc two. "Lost January is a barely disguised "East of the Sun, "Garden in the Moonlight a neo-swinger, "A Night in Toyoma an ambling shuffle, as is the Fats Domino hit from the '50s, "Blueberry Hill. Disc two closes with the lovely Jerry Bock/Sheldon Harnick ballad "Now I Have Everything, splendidly performed by Cole and the rhythm section.

While there's nothing here that will raise goose bumps, everything is nicely played and the AMO swings freely when the occasion demands. It's a loving tribute that surely would have made Risë smile.