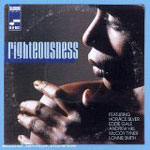 When founder/producer Alfred Lion retired from Blue Note in 1967, the label was plunged into a creative decline from which it never recovered.

If that proposition was put to the critics, chances are most of them would agree. Lion was such a massively influential figure, and the various strands of hard bop he fostered on Blue Note so perfectly captured the mid '50s though mid '60s zeitgeist, that it's hard to imagine anything so wonderful could have come out of the label again following his departure.

But not so fast! The double-disc compilation Righteousness, one of the launch sets in Blue Note's new Explosion series, demands that the immediate post-Lion period be re-evaluated. On the evidence submitted here, Blue Note enjoyed a second flowering—with a radical and coherent new aesthetic—following its acquisition by the Liberty group of labels based in Los Angeles.

The music, made between 1967 and 1971 (and mostly in the two years 1969-70), features many of the artists associated with the Lion era, and much of it is produced, ostensibly, by Lion's co-founder, Francis Wolff. But from there on in, we're on a different planet....

The tunes are funk-drenched and almost entirely groove and ostinato-driven; Eastern sonorities and melodic motifs are widespread; electric instruments, especially guitars, are featured in most lineups; blackism is centrestage; many of the artists are experimenting with vocals, from swelling background choirs through spoken recitation; phasing and other advances in studio technology are being enthusiastically embraced; and ten minute-plus tracks are pretty much the norm. Extra-musically, but significantly, the Reid Miles-designed sleeves which defined the Lion era are replaced by vibrant, Afro-psychedelic cover art from Bob Venosa and the Havona agency (all the original album sleeves are reproduced in the accompanying booklet).

It's a trip from start to finish. Only Horace Silver's two tracks fail to convince: though dressed up like an Indian maharajah for the cover of That Healin' Feelin' (1970), in a Muddy Waters/Electric Mud moment, Silver's heart doesn't seem to be fully in it (and disc two's "Acid Pot Or Pills" is unapologetically and unfashionably anti-dope). But the Donald Byrd, McCoy Tyner, Duke Pearson, Eddie Gale, Bobby Hutcherson, Andrew Hill, Lonnie Smith, Wayne Shorter and Jackie McLean tracks—thirteen in all—are nothing less than stone, five-star masterpieces.

The two Byrd tracks alone are worth the price of admission. 1967's "Slow Drag," the only Lion-produced track here, is a long, slow screw of epic proportions (as is Duke Pearson's "The Phantom"), while 1971's fifteen-minute "The Emperor" (from Ethiopian Knights) is still one of the finest funk/jazz tracks ever recorded. Tyner's "Message From The Nile" (from his criminally underrated 1970 album Extensions), featuring Alice Coltrane on harp, and Andrew Hill's "Illusions" (from 1969's One For One), blending a string quartet with a deep astral-jazz groove, are unforgettable too. As is so much else.

Kick back, fire up and feel the groove.