Lauren Hooker: Right Where I Belong 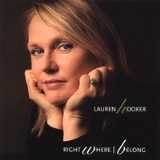 It turns out that not only does jazz singer Lauren Hooker have some impressive credentials, her debut album is also filled with surprises. Born into a musical family, (her father recorded with Bill Evans during their college days in New Jersey), Hooker assumed a career as an entertainer during the early 1980s as well as being a musical educator at The Bank Street School for Children in Manhattan.

Her first big break came in 1989, when she recorded with legendary pianist Mal Waldron and wrote original lyrics to his composition, "The Seagulls of Kristiansund." This singular moment has been cited as a raison d'etre for Hooker's writing skills and the ability to tell stories per her lyrics. The makeup of these eleven tracks consists of seven songs where she has written original lyrics to jazz standards, two originals and two from the Great American Songbook. The title tune is really the traditional melody, "Sometimes I Feel Like A Motherless Child" with her own adaptation changing the title to "Right Where I Belong." On the Duke Ellington classic, "Creole Love Call," Hooker uses her three octave range in vocalese fashion to further enhance the timeless melody.

Perhaps the most impressive part of the album is Lauren Hooker's writing for some of the more modern bebop era compositions with completely different lyrics than originally submitted by the original songwriters. On Wayne Shorter's "Footprints" (here called "Footprints on My Soul"), the lyrics are quite different than those previously recorded, including the Grammy-nominated album by Karrin Allison. Charles Mingus' "Goodbye Porkpie Hat" offers none of the meaningful Lester Young tribute lyrics that made the Mingus tune so appropriate. I'm not so sure that I prefer this one over the original. Thelonious Monk's "Well You Needn't" is given a new dressing via Hooker's title, "You Needn't Call Me," despite previously submitted lyrics (and title changes) from Jon Hendricks and Carmen McRae. "Lovebug Jitters" offers her own take on the classic Fats Waller standard "Jitterbug Waltz."

What matters most with regard to these original rewrites is not whether or not they are better than the words that we may be more interested in hearing, but that Lauren Hooker has the ability and drive to submit these lyrics and deliver them in a swinging sense that befits the works of Shorter, Waller, Monk, Waldron and Mingus.

Right Where I Belong; You'd Be So Nice To Come Home To; Goodbye Pork Pie; The Eyes of Chaz; The Other Side of the Sun; Well You Needn't Call Me; Time and Space; Seagulls; Lovebug Jitters; No Goodbyes; Footprints On My Soul; Ill Wind; Creole Love Call.