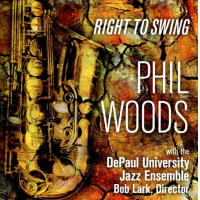 Alto saxophonist great Phil Woods and trumpeter/educator Dr. Bob Lark have a long history of recording together producing notable outings like Live at the Jazz Showcase (Jazzed Media, 2009) and In Her Eyes (Jazzed Media, 2006)—both with The Bob Lark / Phil Woods Quintet. The saxophonist association with Lark and the DePaul University bands has also resulted in three previous albums all with the DePaul University Jazz Ensemble. Right To Swing is now their fourth album together combining performances from the University Jazz Ensemble, under the direction of Lark as well as featuring the Phil Woods Ensemble at DePaul University, essentially a student honor jazz-chamber created by Lark years ago in tribute to Woods.

The center-piece of the album is an all-new revised reprise of the Woods 1960 five-part suite Right Of Swing (Candid, 1960) recorded with an all-star octet. The newly crafted rendition of the classic five-part movements—all performed by the Woods ensemble—kicks off the music with the up-tempo part one "Prelude" featuring a penetrating Woods solo and accompaniment from vibraphonist Dave Bugher, trombonist Andy Baker and pianist Pete Benson. Part two is the first warm spot of the disc with Woods and trumpeter Dave Kaiser offering slow but simmering sweet solos on the beautiful and delicate "Ballad." "African Violets," the only jazz waltz of the set, represents the third movement and one in which Woods added new material distinguishing this version from the original.

The medium-tempo groove of "Scherzo" and "Finale" (originally titled "Presto") represent the remaining movements and documents a swinging improvisational Woods delivering some of his best solo shots. The DePaul University Jazz Ensemble, billed as the "Little Big Band" that could, does very adequately as they lay down the music on the remaining five pieces with just a little assistance from the master. Arranged by student Carl Kennedy, "Weak End" begins the big band segment in high-octane style followed by the more restrained, yet powerfully passionate "Hank Jones," and tribute piece to the legendary pianist.

Arranged by trumpeter Paul Dietrich, "Pairing Off" may just be the sizzler of the disc showcasing a pronounced performance by the trumpeter, a surge from the band and of course a solo chorus from Woods to top it off. A clear album highlight here has to be the moving bossa nova-tinged, Cormac McCarthy arranged "Casanova" presenting some of the saxophonist's more passionate solo statements of the recording. The swing comes to full circle on the dynamic "Blues For Lopes" where it's the band more than any individual player making their mark as seven players are featured on individual solo spots.

Adding to his incredible resume of music, Phil Woods shows no signs of slowing down forging another strong and impressive message with this recording. Saxophonist Woods and his Phil Woods Ensemble at DePaul University along with the DePaul University Jazz Ensemble together, produce an explosive session of big band swing, masterful reinterpretations and humble sweet ballads declaring the "Right To Swing" an unalterable decision here to stay.