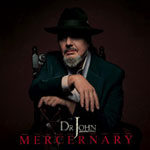 Dr. John at Tipitina's on Mardi Gras, God's in his heaven, and all's right with the world. Right Place Right Time is the second of the projected Rebennack Chronicles, live recordings culled from Dr. John's extensive private collection by uber-producer Joel Dorn. The first release was the exquisite All By Hisself, a 1986 solo outing that found the voodoo doctor in fine form. Add a band to that piano in the cradle of jazz on the Crescent City's highest holy day and the result is a heady brew positing Dr. John (along with Van Morrison) as the living legacy of Ray Charles.

The alcohol-fueled crowd is rowdy and rude as the good doctor opens the festivities with the Creole-laced "Junco Partner, pounding out a New Orleans jailbird on piano. In spite of a full band with horn section, it is Dr. John's piano that shares the stage equally with his distinctive voice. The pianist surveys all of American music from the voodoo roots of the original "I Walk on Guilded Splinters to the rock 'n' roll of "Let the Good Times Roll to the blues of Chester Burnnett's "Wang Dang Doodle. The disc ends with Dr. John's greatest achievement, the beautiful throwback "Such a Night.

The pace of the disc is fast and furious and is sometimes a bit rushed, most likely because of the circumstances of the recording. My only true quibble with the performance is that the backup band is late-'80s over the top. Dr. John is probably best served in a solo setting. However, Dr. John is a cultural treasure who should be preserved under any circumstances. If you doubt that, summon "Such a Night and listen to the extended piano introduction, a distillation of all New Orleans piano history from Louie Moreau Gottschalk right up to Mack Rebennack.