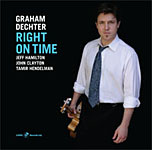 Memo to all those folks who insist that "real" jazz is dead, or at least on life support: do check out the leader/producing debut of 23-year-old guitarist Graham Dechter. His Right on Time supplies irrefutable evidence that the tradition is not only alive, but flourishing, because of young artists like Dechter who are both able and eager to carry the torch.

The first thing you notice is Dechter's warm, round tone; what registers next are his great time, technique, and expressiveness. Dechter has filled the guitar chair in the peerless Clayton Hamilton Jazz Orchestra since the ripe old age of 19, when he was plucked from the Eastman School of Music by drummer and co-producer Jeff Hamilton, and his band mates here are three of the CHJO's leading lights. It could be argued that there's no better drummer, bassist, or pianist working today than Hamilton, John Clayton, and Tamir Hendelman, and after four years together Dechter clearly holds his own in that artistic company.

The CD contains a varied and well-sequenced program that includes Duke Ellington ("In a Mellow Tone," "I Ain't Got Nothin' But The Blues"), Antonio Carlos Jobim ("Wave"), Dechter's dad Brad (the tuneful title track), a rarely-heard Thad Jones ("Low Down") and some funky Ray Brown ("Lined With a Groove," where Clayton plays Brown's exact intro line on Brown's actual bass, which is now his). Most of the ten tracks gleam with energy; "Squatty Roo" is a whiz-bang tour de force all around, where Hendelman conjures Oscar Peterson with his blazing two-handed runs. There's also a pair of lustrous ballads: "The Nearness of You" and "With Every Breath I Take," with its achingly beautiful duet between Clayton's burnished arco and Dechter's elegant lines. Finally, the recording quality is so crisp and real that you can almost count every strand of Hamilton's brushes, and his dazzling solos roll between the speakers, bringing the listener right smack into the middle of the band.

All told, Right on Time provides an hour of terrific jazz as well as hope for its future. It's a rare, powerful and uplifting combination—which also happens to swing like mad.

Low Down; Wave; The Nearness of You; I Ain't Got Nothin' But the Blues; Broadway; Right on Time (Db Tune); Squatty Roo; With Every Breath I Take; Lined with a Groove; In a Mellow Tone.