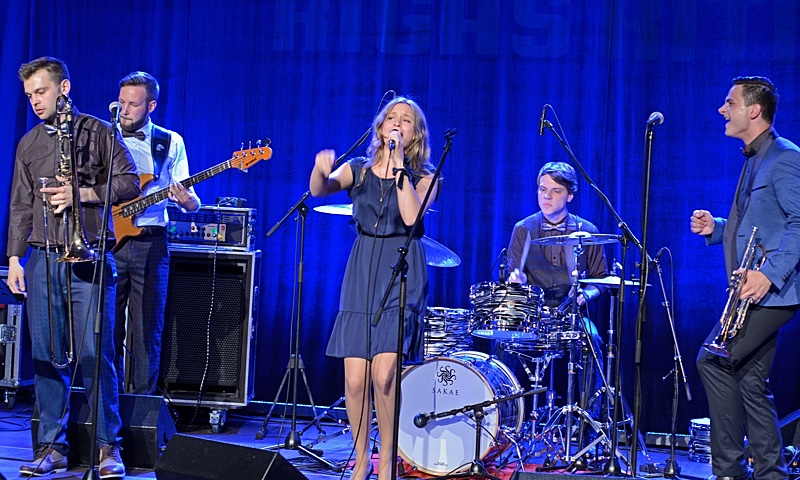 The 15th anniversary of Rigas Ritmi was celebrated in fine style in Latvia's beautiful capital city. Māris Briežkalns, the festival's artistic director, had programmed Latvian artists and internationally-known musicians in a mix of large and small, old and new, venues. From the mediaeval squares of Old Riga to modern clubs and concert halls, the four-day festival presented around 20 performances: jazz was the central focus, but funk, soul, hip-hop and folk all featured across the weekend.

The festival's rather low-key opening concert took place on the Origo Summer Stage, an outdoor venue in front of Riga's main railway station. The event was free, as were other open-air performances, and attracted a large and receptive, if ever-changing, crowd. The concert featured singer Kristīne Prauliņa, winner of the 2014 Riga Jazz Stage competition, making her first appearance of the week, and the Bunch Of Gentlemen, a powerful 11-member funk and groove outfit full of the swagger and enthusiasm required to project their good-time vibe across and beyond the crowd.

Rigas Ritmi's serious business got under way the following morning as the main program of concerts, club gigs, showcases and workshop events began. The concerts got the big crowds, but some of the festival's gems were tucked away in the smaller venues.

Bugge & Friends was playing its first concert of a tour promoting its self-titled album (Bugge & Friends Jazzland Recordings, 2015). The band favored lengthy numbers, characterized by layers of sound (often electronically altered) and rolling rhythms. The results were hypnotic, almost somnolent. Ersahin and Truffaz took on most of the lead playing, the strong tone of the tenor complementing the more fragile sounds of Truffaz' trumpet. Wesseltoft moved swiftly between keyboards and occasionally injected a little humor into the proceedings, underpinning one Truffaz solo with phrases from "Frère Jacques."

Rada, born in Israel of Ethiopian parents, presented a set that mixed her own songs with those associated with one of her inspirations, Nina Simone. Backed by a sextet, Rada delivered the songs with verve and her soulful voice grabbed the attention from the beginning. Her version of Billy Taylor's "I Wish I Knew How It Would Feel To Be Free" lost the gorgeous melody of the original in favor of more emphasis on the tune's rhythmic pulse. Her own "Life Happens," with its easy groove and singalong feel, and a cover of "Feelin' Good" were highlights.

Friday evening's bill consisted of a duo performance from trumpeter Paulo Fresu and bandoneon player Daniele di Bonaventura and a solo set from New Mexico born guitarist/singer Raul Midón. Due to scheduling clashes (the bane of any jazz festival reviewer's life) I missed the Fresu/Di Bonaventura set and the first half of Midón's appearance. A pity, because feedback on the duo was positive and the closing half of Midón's set was one of my festival highlights—his guitar style was impressive, mixing percussive rhythms with flowing melodic lines, the emotional power of his vocals betraying the influence of Richie Havens and Stevie Wonder.

The Saturday evening double bill was the 2015 Rigas Ritmi's focal point. Cuban pianist Ramon Valle opened with a beautiful solo set which included a cover of Leonard Cohen's "Hallelujah" and original compositions such as the lovely "Levitando," the bright and happy "Principe Enano" and "Five Sisters," a tune dedicated to his siblings that shifted subtly through romantic passages and jaunty dance rhythms. Valle's intimate, at times introspective, performance was greeted with reverence by the audience (it was notable throughout the festival that the audiences were attentive and responsive).

Allan Harris and the Latvian Radio Big Band joined together for a big-scale tribute to Nat King Cole. Harris had arrived in Riga a few days earlier in order to rehearse with the local musicians. The result was a slick, stylish, show: a technical issue with Harris' guitar on "Route 66" the only blemish on an otherwise beautifully-executed concert. The big band delivered strongly, both as an ensemble and in the quality of the soloists. As in previous years, it was a joy to hear.

Harris proved to be an engaging front-man with an old-school style. Cole's greatest hits followed one after another, Harris' rich baritone readily recalling the legendary singer/pianist—"Here's That Rainy Day" was cool and controlled; "On The Street Where You Live" saw the first appearance of a string section; "Mona Lisa" and "When I Fall In Love" were gentle and romantic, Harris singing with just the strings for company; "Nature Boy" gained an upbeat and funky arrangement featuring conductor Kārlis Vanags on alto; "Dance Ballerina Dance" and "Can't Take That Away From Me" were full-on swingers.

Out In The Open Air

Rigas Ritmi was blessed with a week of hot, dry weather which created the right atmosphere for the open air performances. The EGLE stage in Riga's old town played host to acts including Bunch Of Gentlemen (making one of its three Rigas Ritmi appearances) and Ralf Eilands & PeR. The stage's position in the center of one of Old Riga's most popular squares meant that the acts were seen by people, especially tourists, who would probably not have attend the more formal festival events.

It wasn't a venue for the introspective singer/songwriter. This was a place for immediately engaging artists and music—an ideal venue for the punchy horns of the Bunch Of Gentlemen (whose members, as always, were promoting the bow tie as the neckwear de nos jours) and the confident vocals of Eilands.

The calmer Daugavas Concert Hall—on the roof of a large riverside nightclub—offered striking views across the city for those audience members who wished to take advantage. Once Cyrille Aimée came on stage with her band, the crowd quickly focused on the stage, not the city view. Aimée is an engaging artist and her performance was fresh and vibrant, encompassing standards and modern classics by the like of Michael Jackson.

Rigas Ritmi offers local Latvian artists the opportunity to raise their profiles through performances in the Showcase concerts. There were two this year, held on the Thursday and Friday afternoons in the smaller of the Congress Centre's two halls. Each Showcase featured four musically diverse acts, from jazz, to funk (the Bunch Of Gentlemen with another engaging and fun set featuring singer Arta Jēkabsone) to folk.

The showcase concerts gave another demonstration of the depth of Latvian musical talent, but in one or two cases the artists were disappointing, lacking experience or expertise as performers, writers and/or musicians. Some audience members also expressed concern at the high volume level in the hall, which caused more than one person to leave.

More positively, most acts showed originality, skill and a willingness to take chances and experiment. On Thursday vocalist Daumants Kalniņš, winner of the 2015 Riga Jazz Stage contest, led his band with confidence through a set of original songs and combined a strong voice with stage presence. "Heart's Doors" impressed with its easy swing feel. The Presence Of JR—a guitar, bass, drums trio—mixed Mahavishnu Orchestra fusion, progressive rock riffs and a touch of folk whimsy (during "Inner Peace" guitarist Jānis Ruņģis left the stage to play a small wooden whistle from behind a curtain), making use of the rarely-heard but effective bottleneck electric bass guitar.

Kristīne Prauliņa And Friends (pictured above and also known as Alaska Dreamers, as bassist and writer Reinis Ozoliņš told me after the set) opened Friday's showcase. The 10-piece band incorporated all of The Presence Of JR—which gave the three men a chance to show a subtler side to their playing—and at least one horn player from the seemingly ubiquitous Bunch Of Gentlemen. Prauliņa's feisty stage presence and soulful voice reminded this reviewer of the great Scottish singer Lulu. When instrumentation was stripped back to guitars, drums and voice on rootsy songs such as "Finally Free," the sound was redolent of T-Bone Burnett—guitarist Mārcis Vasiļevskis' swampy, rich, Les Paul tone was especially atmospheric.

One of Rigas Ritmi's most exciting aspects is its workshop series, which gives young Latvian musicians the chance to learn from and engage with top jazz players. The 2015 workshop program was the best I have experienced, with every one having its own flavor. Ramón Valle played superbly, got the audience involved in attempting clave rhythms and projected a winning mix of enthusiasm and love. Allan Harris was both amusing and informative, presenting two workshops on various aspects of performance and developing a personal musical style. The ever-enthusiastic Cyrille Aimée, partnered by guitarist Michael Valeanu, gave two participants the chance to sing and provided constructive advice about performance to all of the assembled audience.

Raul Midon dealt with some complex technical issues around subjects such as chord construction, harmonics and soloing with genuine clarity. He performed a few of his own songs to illustrate his techniques: like Valle, the result was a private mini-concert for the lucky workshop participants. Ester Rada proved to be less confident as a workshop leader than she was as a performer, but she discussed her own development and her personal approach to her music with honesty and openness—I discovered after the event that this had been her first ever workshop presentation.

I visited the festival as a guest of the organisers, along with 10 or so other writers and music industry professionals. On Saturday afternoon I had the pleasure of moderating a panel discussion, the final event of the workshop program at the studios of Latvian Radio, in which I and six other guests answered questions from the audience—predominantly young Latvian musicians—on various aspects of the music business. Music remains a tough business, but festivals like Rigas Ritmi and young musicians such as those I met and heard in Riga make the future look hopeful.