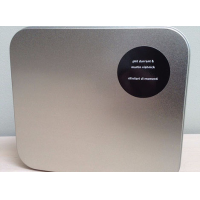 The fact that this duo exists is a testament to the network of improvised music workshops and venues that thrive in London, with interested musicians often hearing about them by word of mouth. One such workshop is Skronk, which is run every fortnight or so by New Zealand expat and saxophonist Rick Jensen, who welcomes all comers to New River Studios and selects a series of impromptu small groupings—who have frequently never met before—to play short improvised sets, often with astonishing success. One evening in April 2017, London residents Phil Durrant and Martin Vishnick separately attended Skronk. Originally trained as a violinist, Durrant later branched out into electronics but, by the time of this visit to Skronk, was also playing mandolin, an understandable choice as it has the same tuning as violin. On his website, Vishnick describes himself as guitarist, composer, teacher and researcher, the latter roles all relating to his chosen instrument, classical guitar. That evening, it was apparent that Durrant and Vishnick shared an interest in exploring extended techniques, showing the influence of electronic music... and so this duo was born. While the combination of mandolin and guitar is not uncommon in other settings, in improvised music it is extremely rare. Durrant and Vishnick set about changing that, playing regularly at improv club events such as John Russell's Mopomoso, Alan Wilkinson's Flim Flam, the 2018 Skronk Festival, the Horse (see YouTube, below, for a taste) and others. In March 2018 they recorded this album. Its nine tracks run for fifty-one-minutes, the longest approaching seven-and-three-quarter-minutes, an indication that there is no padding here; every note counts. As in any improv duo that is worth hearing, Durrant and Vishnick are equal partners throughout, constantly listening and reacting to one another, with neither of them leading all of the time. Because mandolin and guitar have different timbres, it is easy to distinguish both throughout the album, a vital factor in hearing who is doing what, particularly when the two become intertwined. None of the pieces displays any evidence of premeditation; each of them is kick-started by one of the pair playing a brief phrase which elicits a response from the other and so forth. Once into a piece, they play together most of the time, rather than adopting an obvious call-and-response methodology. The trust they have in one another is evident throughout. As a listening experience, it is richly-detailed and kaleidoscopic, with never a dull moment. On this evidence, Durrant and Vishnick will be compelling listening for years to come, on disc or in concert.