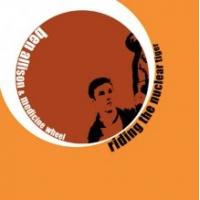 Bassist Ben Allison founded the Jazz Composers Collective in New York City in 1992, and has been a centerpiece of that non-profit organization and the local jazz scene ever since. Allison leads his septet Medicine Wheel through nine shifty, modern jazz tunes on their third record Riding the Nuclear Tiger.

The non-traditional instrumentation of Medicine Wheel, with a cellist and a versatile horn section, creates a spicy sonic palette to present Allison's tunes, as one of the saxophonists also plays bass clarinet and the trumpeter plays some flugelhorn. These unusual timbres wind around the more conventional sounds of soprano, alto, and tenor saxophones, piano, upright bass, and drums.

Allison's angular and darkly melodic lines shine with a barely perceptible tinge of atonality that gives Medicine Wheel's sound a refreshing originality. The musicians in Medicine Wheel skillfully execute this vision, working the subtly atonal sound into their individual solos. The liner notes explain the inspiration or musical starting point for each tune, like the Charles Mingus idea for the moody groove of "Love Chant Remix," the exhilaration of clinging to something out of control that fuels "Riding the Nuclear Tiger," and the atonal opening head to "Charlie Brown's Psychedelic Christmas."

Riding the Nuclear Tiger celebrates traditional jazz ideas while breathing new life into them with modern tonality and a dark sound. Ben Allison shines as principal composer and leader of Medicine Wheel.