By GLENN ASTARITA
August 6, 2008
Sign in to view read count 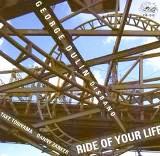 In the liners, producer Bob Rusch iterates about the thousands of demos he receives in the mail during the course of a year. Luckily, for us modern jazz aficionados, Rusch judiciously recognized the talents of thirty-year old Kansas City reared pianist George Dulin. And it's not just another jazz piano trio recording by any stretch.

Like boxers preparing for battle in the ring, the opening bell rings in with the bustling and nicely in-your-face piece titled "Stingray Road, " where Dulin immediately goes for the TKO. Constructed upon a jazz-rock like motif, the band packs a massive punch via quirky time changes and the leader's flailing crescendos. Nonetheless, it becomes apparent from the get-go, that Dulin is a hip and extremely talented young lad.

The pianist is a mover and a shaker throughout. And he's a strikingly lyrical technician who transparently crosses the bop, mainstream and free realm, which are attributes that ultimately translate into a deeply personalized mode of attack. Dulin conveys a bit of the Bill Evans' school during the melodically shaded movements while blasting out massive block chords to create a sense of the dynamic within tension and release type statements. No doubt, the artist and his rhythm section aims to excite the mind's eye, whether rendering odd harmonic overtures or effortlessly whirling through rapidly paced bop motifs.

On the piece titled "Johnsugar VII, "Dulin goes into overdrive while hammering out stately bop lines to contrasting the band's propensity to switch gears on a nanosecond's notice. In addition, the musicians execute high-velocity unison runs and medium-tempo explorations amid Jordan Perlson's high-impact drum breakouts. But Dulin softens the proceedings and is as gentle as a lamb on his wistful composition, "Seawatch."

One of the many highlights of this album is Dulin's rearrangement of the standard "Softly, As in a Morning Sunrise, " which he titles, "F.M. Downward Spiral." Here, the pianist reengineers the primary theme while retaining its inherent beauty. The trio ups the ante with a climactic blitz and then retracts into a descent sparked by Danny Zanker's bass solo.

Dulin looms as a significant performer who communicates an acute penchant for dynamics to complement his enviable chops and wide-ranging jazz vernacular. It's partly about shifting tides and the trio's cunning ability to fuse sweet melodies with finesse and muscle. And Dulin is apt to play with your psyche due to false endings and brisk shifts in strategy. Otherwise, it would be an injustice if this album were to dwell in obscurity. Simply stated, Dulin is a major talent who does indeed take you for an irrefutably exciting trek through his vast musical world.