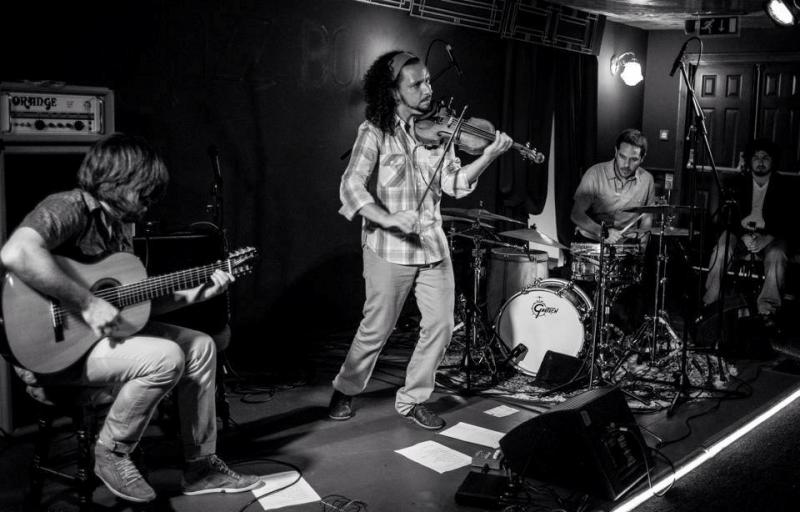 It was a happy case of serendipity. The square in front of BelloBar was buzzing with vocal chants, clapping, percussion and the twangy rhythmic drive of three berimbau, urging on the dancers in their strange ballet that was part mime, part cutting contest. The Caporeira Mundo School, a stone's throw away in Synge Street, had gathered a crowd on this reasonably sunny afternoon—sunny enough for the offering up of shirts to the Sun God —and the whole scene felt like a warm-up/red carpet for the Brazilian trio of violinist Ricardo Herz.

There was a bit of a South American theme in the underground BelloBar venue, as Peruvian drummer Cote Calmet's quintet Phisqa set the tone for the evening with an energized set that drew from its impressive debut Phisqa (Self Produced, 2013), but whose emphasis on polished newer material suggested a new recording is in the offing.

Colmet's dancing unaccompanied intro to "Moche," laced with Afro-Peruvian rhythms, was soon joined by bassist Cormac O'Brien's ostinato and pianist Leopoldo Osio's jangling chords, laying the foundations for saxophonist Tom Caraher and guitarist Julien Colarossi's unison melody, grooving and urgent. The head dissolved in an explosive climax, opening a pocket of silence into which Caraher poured flowing melodic lines, driven by Calmet's industry. The intensity then eased off to allow Colarossi's more delicate entrance. The Italian's highly articulate solo, built unhurriedly but assuredly, lifted the quintet back to its previous high-intensity plateau where another pocket of repose awaited. With all reunited on the head the quintet powered over the finishing line.

The fiery opening track contained Phisqa's essential ingredients; infectious rhythms, rising/falling waves of intensity, strong melodic hooks and fine soloing. "A Cup of Life"'s dramatic contours featured another impressive solo from Caraher, who has made the saxophone berth his own following the departure of Chris Engel. Osio felt his way into his own solo, bouncing from chord to flowing glissandi and back.

Calmet's new compositions were equally striking. "Fratello" grew from Colarossi's gossamer intro into a delightful collective funk/R&B groove that would have graced saxophonist Joshua Redman's songbook. Osio, warming to the task, took a flowing extended solo that reconnected the quintet to the head and another pulsating climax. Despite the title, "Lima La Gris" ("Lima the Grey") burned with post-bop intensity. "Lullaby for Nicomedes"—evocative of saxophonist John Coltrane's "Naima"—was bookended by bass and mallets intimacy, with a lyrical intervention from Colarossi. The grooving hard-bopper "Candela Azul" featured O'Brien and Colarossi in expansive form and a dancing cajon/kit solo from Calmet. The drummer briefly switched sticks for charango—diminutive Andean lute—on the lovely intro and outro of the dynamic "Ayarachi," a celebratory tune of carnival/martial rhythms and free improvisation, which closed a thrilling set.

The last time All About Jazz covered violinist Ricardo Herz it was in more tropical climes, at the Miri International Jazz Festival in Borneo in 2010. The quartet that day featured Luque Silva on seven-string guitar, bassist Meno Del Picchia and drummer/percussionist Pedro Ito. Four years on, the seven strings are in the hands of Michi Ruzitschka and the ensemble is bassless. In essence, however, the music that rocked the BelloBar was the same—popular Brazilian folk music that revolved around intricate trio interplay and Herz's vibrant fiddle virtuosity.

The trio brought things down on the gently paced "De Ontem Pra amanhã," a celebration of melody pure and simple. Herz' pizzicato introduced "De Todo um Pouco," a mid-tempo tune that, as the title suggests, borrowed melody and rhythm from various points on the compass—from North Africa to the Middle East and beyond. Ito eschewed sticks for hands, doubling on cajón—which also served as drum stool throughout the gig— and frame drum.

Having studied in France with violinist Didier Lockwood and at Berklee in Boston, Herz is well schooled in the jazz idiom. That said, even on faster, more free-limbed pieces like "Quase Cuando," Herz's loyalty was to the tune's melody, and improvisation took the form of grace notes and rhythmic dexterity rather than show-stopping solos. Weaving and bobbing as though dancing with his instrument—or dodging bullets—Herz' infectious energy was matched by Ito's inventive rhythms every step of the way.

A classically-influenced solo violin piece "Odeon" was dedicated to its composer, Ernesto Nazareth. Herz recorded this composition on "aqui é o meu lá (Scubidu Records, 2012) to mark the 150th anniversary of the Nazaeth's birth. Almost the only song of the set not from that CD was Gordurinha and Almira Castilho's breezy 1950s tune "Chiclete com Banana," a duet for Herz and Ruzitschka. Two contrasting trio numbers closed the show: "Desvairada," a highly charged variation on violinist Aníbal Augusto Sardinha's waltz "Desvairada," and Herz's "Sete Anões," whose delightful melody will linger in the memory as much as Herz' dashing improvisation, fueled by Ito's tumultuous rhythms.

Inevitably, and to everyone's delight, the trio returned for an encore, "Segura!," whose dancing forró rhythm concluded the evening on a festive note with a double-time sprint of cartoon-esque proportions. This gig was the last of a ten-gig tour of France and London; based on the phenomenal energy of this performance, it's quite possible that Herz, Ruzitschka and Ito saved the best of their wonderful cornucopia of Brazilian rhythms and melodies to last.

The Ricardo Herz trio/Phisqa gig also signaled a feather in the cap for BelloBar; following saxophonist Tony Malaby's gig earlier in the week, the launch of the Dublin Jazz Book the week before, not to mention the weekly Sunday jazz gigs and jam sessions, this attractive underground venue has quickly established its place as a vital part of the Dublin music scene.