By KARL ACKERMANN
December 22, 2016
Sign in to view read count 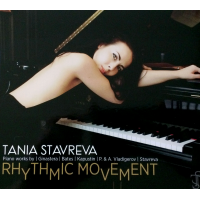 Pianist and New York City resident Tania Stavreva is a cross-genre trailblazer in the vein of a Stefano Battaglia. More than being at home in both classical and jazz, the Bulgarian native has found an approach that—when desired—connects elements of each form and adds her own methods, resulting in a unique hybrid. The twenty-something artist has appeared with Ron Carter and played top international venues from Lincoln Center to Italy's Cathedral San Lorenzo. Rhythmic Movement is her debt as a solo performer and is being released on her own label.

The Ron Saint Germain produced album features fourteen compositions from an eclectic range of composers and two from Stavreva herself. Opening with the title track, Stavreva's original composition was written for an off-off Broadway production of The Tempest, in which she had an acting part as well. Unlike the original version, Stavreva rearranges the piece in a time signature for dance. A traditional Bulgarian folk tune, "Ratchenitza" is bookended on the outside by "Mouvement Rythmique" which translates to the album's title as well, though an entirely different piece. Its uneven rhythm is also commonplace in Bulgarian dance music.

Three works from Argentinian composer Alberto Ginastera create a slow dramatic build to the albums mid-point. "Danza del Viejo Boyero," "Danza de la Moza Donosa" and "Danza del Gaucho" are each part of a cycle known as "Danzas Argentinas, Op. 2." Those familiar with Egberto Gismonti's Danca Das Cabecas (ECM, 1977) may find some conceptual similarity in the nature of the material. "Ruvido ed Ostinato" picks up the previously generated energy setting the stage for the more avant-garde works of Russian composer Nikolai Kapustin. "Jazz Concert Etude Prelude" and "Jazz Concert Etude Toccatina" play directly into Stavreva's strength in merging genres. Stavreva's own composition "The Dark Side of the Sun" is more ominous and includes her extended technique of working the strings inside the piano.

"White Lies for Lomax"—a tribute to ethnomusicologist Alan Lomax—was first recorded as a solo by Stavreva on Mason Bates' Stereo Is King (Innova Recordings, 2014). She then returns to the Bulgarian tradition with a series of variations on the folk song "Dilmano, Dilbero" wrapping up the album with "Ritmico y Distorsionado," a variation of "Ruvido ed Ostinato" but added percussion and some distortion.

Musically, Stavreva is already an accomplished artist with a no-holds-barred attitude toward her music and her independent approach. Rhythmic Movement is a bold project that asserts the role of folk and dance at the center of modern creative music. Stavreva's interpretations stretch the original concepts and play spirals around them, respecting their heredity without being subject to the same.