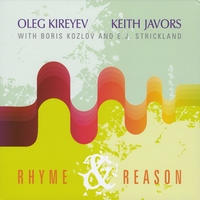 Rhyme and Reason is a spare collection of just six charts that swing with both familiar and unfamiliar time. All four members of this vibrant quartet, fronted by pianist Keith Javors and saxophonist Oleg Kireyev, seem prepared to let the music flow from the most commonly known musical focal point out into the sea of surprise, where each of the artists appears to corral the unknown. Javors has a rather forthright style, but does not shy away from the softer emotions, and his music lies in the eye of the proverbial centrifuge of the yin-yang. He appears to be the go-to man who seizes the moment, while at the same time opening the doors of perception, not only for himself to explore, but also for the other musicians, who quickly latch on to the openings he has created.

His opening to "What is Love" is a case in point. The pianist picks out a seemingly circular figure which dallies beautifully, as if enticing the Kireyev to enter and tread softly in the footsteps of the pianist. For his part, the saxophonist employs his broad and brazen tone as an authoritative voice that floats in the wind. His is a mesmerizing, sensuous voice—sometimes throaty like Coleman Hawkins, and at other times husky, seductive and hypnotic as big Ben Webster. And he plays with a kind of fluidity that few can, his fingers rippling across the keys as he creates rhapsodic flowing ideas that twist and turn flying forth and then returning anew. He does so in "What is Love," as much as he sets the tone of his attack right from the opening "Rhyme and Reason."

So then, perhaps it takes a right-brain/left-brain endeavor to create music that tantalizes delightfully, like a double-helix, dancing as it twists its way just out of reach of both right and left brain. Rhyme and Reason after all must call for a rather oblique approach to listening to the music as well. And this it surely does as song after song presents itself buttressed by a shifting sands kind of prospect for the inner ear. To anchor it all in the world of harmony and rhythm and still reference the flighty rhyme and reason there is the superb battery of ingenious bassist Boris Kozlov and the seemingly uncontrollable energy of drummer E.J. Strickland. Kozlov is, by now, well known for his sublime grasp of the mighty bass that he seems to toy with as Charles Mingus sometimes did. Here, too, he is the master of the bull, driving the music with breathtaking ostinato passages as in "Chinatown," and his dexterous control of harmony as well as melodic content. And Strickland too is coming along fine with the energy and the sense of where the pulse of the music is, so that he can shift it at will.

This is a smart record, with much music in which to come to terms demanding multiple listens that will grow enjoyment exponentially.