By FLORENCE WETZEL
October 15, 2010
Sign in to view read count 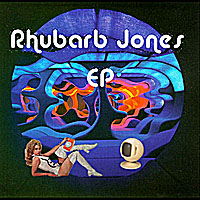 The marriage between jazz and rock is long and continuing, and there's a new band on the scene that takes the best from both worlds. Fresh from the rock 'n' roll suburbs of Millburn, New Jersey, come the powerful sounds of Rhubarb Jones. The band, which formed in 2009, comprises four young men under the age of 20: Alexander "Sug" Sugarman on vocals and sax, Brian Seltzer on guitar and Sander Bryce on drums; Steve Magee plays bass guitar on the disc, but Michael Giordano later took on the bass for live gigs.

All four musicians are connected with jazz, having played in lineups ranging from free-improv groups to orchestrated big bands. Sugarman's sax lends a distinctive voice , and raises the sound above that of formulaic garage. Although it's possible to identify Rhubarb Jones' origins (Led Zeppelin and Pink Floyd come to mind), its music is all its own.

The opening track, "By My Side," succeeds in being both hard-driving and wistful. There's a poweful guitar riff backed up by pounding bass and drums, but there's also a haunting sax weaving throughout, lofty harmonies, and lyrics redolent of longing and change. Sugarman's voice registers all these shifts of mood and more. All bands need a strong lead singer, and Sugarman's four-octave range and combination of swagger, sincerity, subversiveness and melancholy is the perfect fit for Rhubarb Jones.

"Destination" is a slow, pensive song, an authentic report of being in one's late teens in the post 9/11 world. Sugarman pours his heart into the lyrics and his sax, and Seltzer, Bryce and Magee move seamlessly between understated dynamics and full on potency. The grand scale of emotion and music is reminiscent of Zeppelin and Floyd, and there are hints of the venerable Morrissey on lyrics such as "Can I exist with these other people? / What will become of me?"

"The Convict" is immediately appealing, with its powerful, melodic groove and kaleidoscopic shifts of tempo and dynamics. Each of the musicians stands out on his instrument, and each also shines in the group harmonies and funky, unexpected interludes of call-and-response. This song is an excellent example of Rhubarb Jones' ability to create a multilayered song that contains a wealth of moods.

"Right Now" also grabs the listener with a catchy guitar groove and a powerful beat with a whiff of reggae. The song is bursting with infectious grooves and sharp, funny lyrics: "In the dress I do confess / You make me a mess / Put me in cardiac arrest / What a jest." This is high-octane rock that showcases the band's strong, playful energy.

"Follow Me Baby" is Rhubarb Jones' tour de force, their definitely ready-for-airplay composition. There's a funky beat, a great sax work and terrific lyrics, plus the harmonies on the refrain are just soaring. All the musicians play at the top of their game, and the song wraps with an instrumental ascension so powerful it notches the song up yet another level. It's definitely the strongest song among a CD full of strong songs.

The CD wraps up with "Autonomy," another song that showcases Rhubarb Jones' pensive side. It's a meditation on the world we live in, featuring fresh guitar licks and powerful drumming. Sugarman's voice wraps around the words with greatest sincerity, and the song ends on a positive note with the refrain: "Don't lose hope / Believe in what we have."

For anyone who despairs of the future of jazz, groups such as Rhubarb Jones offer hope: as jazz weaves its way through the hearts and minds and music of the next generation, on this evidence, its future looks bright indeed.


Tracks: By My Side; Destination; The Convict; Right Now; Follow Me Baby; Autonomy.