By JIM SANTELLA
February 22, 2006
Sign in to view read count 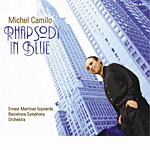 The crystal clear articulation with which Michel Camilo interprets "Rhapsody in Blue" comes naturally. He was a child prodigy, after all, who joined the National Symphony of the Dominican Republic at age sixteen. Here, with the 95-piece Barcelona Symphony Orchestra, he resurrects George Gershwin's landmark composition with its jazz inflection and significant orchestral jazz textures. Camilo's grand piano weaves a silver thread through the piece, summoning up the deep feeling that comes ingrained in the composition. Without those emotional overtones, the piece would not have had such an impact on us during the Jazz Age.

Written just one year after "Rhapsody in Blue," Gershwin's three-movement Concerto in F emphasizes rhythm much more than its predecessor. With this extended piece, Camilo is free to ride the swinging vehicles of the Roaring Twenties with aplomb. The pianist's intense rhythmic drive—he was a percussionist with the National Symphony—helps him to interpret this piece with accuracy. You can feel the syncopation of ragtime as the orchestra builds momentum. In the second movement, a deep blues oozes through as open trumpet and violins carry the theme with passion. Camilo's piano interpretation carries a powerful wallop, particularly on the Allegro Agitato movement, where he brings the session to a boil.

"Prelude No. 2" was originally titled "Blue Lullaby." Here, the pianist provides a dreamy soliloquy without orchestra that timidly unleashes Gershwin's magical spell. The blues comes woven throughout its lovely texture as Camilo closes the album with quietude. He's captured the heartfelt passion in Gershwin's compositions, as well as the composer's overt rhythmic connection to early jazz.