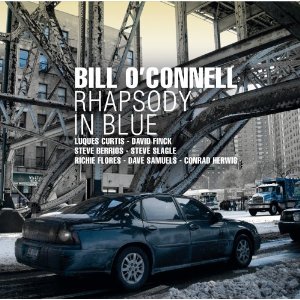 Pianist Bill O'Connell has a varied career as a musician. After studying classical music he found inspiration in jazz and salsa. He shaped his instincts for the latter with Mongo Santamaria with whom he played for two years. From there he gravitated to Sonny Rollins and Chet Baker. This wide spectrum served to expand his skills and his approach to the piano. He is as adept at hard bop and mainstream jazz as he is in Latin jazz even though he is largely considered to be a proponent of Latin music.

O'Connell plays with a sense of purpose as he lays open a theme and drives it forward imbuing the concept with insight. His instinct is the creative force as he brings an unabashed sense of accomplishment to his musical journey.

"It Never Entered My Mind" is evocative not only of his approach but that of his band as well. The graceful arc of the melody is traced by Steve Slagle on the soprano saxophone which he imbues with warmly flowing lines. O'Connell adds soft sonority letting the nectar of the melody seep into the senses, as he lets this standard bathe in the mainstream.

His ideas are quite different when it comes to "Rhapsody in Blue." O'Connell pays homage to the composition and the melody on the head, only to have Slagle sideswipe it and bounce into a flamboyant pulse. O'Connell stokes the texture with a swell of notes that groove in Latin territory, an environment that is a comfort zone for percussionist Richie Flores. The arrangement is expansive; O'Connell's chart gathers the musicians and lets them open the pathways to adventure. That gives drummer Steve Berrios the space to enunciate the rhythm in tandem with bassist David Finck through an imaginatively orchestrated chart.

"Rose Hill" one of the seven tunes O'Connell wrote for this CD, profiles his softer side. The conversation between him and Slagle shows an easy rapport in the assimilation of thought and process. Slagle's yearning serenity palpitates with harmonic tension while O'Connell eases the taut harmony with forays into supple declamations and a meditative incursion into the melody.

The music is constantly charming and evocative of talent that knows how to divine a tune with conviction.