Rex Richardson: Bugles Over Zagreb: The Music of Doug Richards and Blue Shift 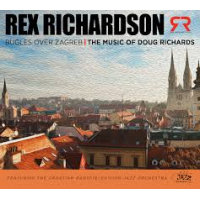 Rex Richardson
Bugles Over Zagreb: The Music of Doug Richards
Self Produced
2014

Master class trumpeter virtuoso Rex Richardson is one of a rare breed of jazz musicians who can successfully straddle the worlds of classical and jazz without sounding like he's a mere overnight guest when performing in either genre. His focused, fiery delivery and high wire act of technical prowess is uncompromised whether soloing for orchestras in Slovenia and Manchester or fronting a jazz combo in a club in Richmond, Virginia where he resides as resident professor of trumpet, jazz improvisation and chamber music at Virginia Commonwealth University.

The past month provided a double treat, because never before has Richardson released two jazz recordings in the span of just a few months, let alone a year. With Bugles Over Zagreb: The Music of Doug Richards and Blue Shift, Richardson consolidates the musical relationships that he has nurtured for many years and channels them into two distinct and powerful jazz statements.

Bugles Over Zagreb is inspired by a spectrum of musical characteristics from across the globe and recorded live at Croatian Radio television studio in Bajsić with solid backing by The Croatian Radio television Jazz Orchestra. The first half of the CD presents the "Intercontinental Concerto for Trumpet and Jazz Orchestra" and the second half is entitled "Dukal Bugles," written as a tribute to Duke Ellington's best-known trumpet stars, consisting of five sections unfolding into one continuous movement.

The relationship between Richards and Richardson akin to Gil Evans and Miles Davis, featuring Richardson as the soloist and creative focal point for these startlingly original compositions. But while "Intercontinental Concerto" is orchestral in its format, this is not the deliberate classical posturing of Evans, but rather bold, expansive jazz grounded with modern elements like electric guitar and funky Hammond B3 organ.

Richards' arrangements for "Intercontinental Concerto" cover a vast ethnic canvas, coloring the music with folk accents and instrumentation ranging from the Japanese sho to the aboriginal didgeridoo. What will be startling for the unenlightened, though, is that these songs present Richards as an arranger whose grasp easily exceeds the reach of most out there today. One listen to the sustained sonic textures of the orchestra in "Asia: Gagaku Blues" is enough to convince anyone of the great scope of Richards' musical vision.

Both in arrangement and execution, the pleasures in Bugles Over Zagreb are many. The irresistibly rhythmic "Africa" is based on a catchy Ghanian folk tune and is highlighted by no less than three call-and-response duets between Richardson and guitarist Elvis Penava, trombonist Luka Zuzic and baritone saxophonist Damir Hovat. The break with Penava's guitar on this track is a particularly inspired stroke of genius by Richards.

The organic blues of W.C. Handy is channeled through "North America: Aunt Hagar's Blues" courtesy of Ellington-esque plunger mute work by Richardson coupled by rhythm guitar. Then we come to "South America," the Ernesto Nazareth composition which closes the intercontinental portion of the disc and presents orchestral jazz at its most ebullient. Over a syncopated samba, Richardson and the orchestra trade 8s with amazing precision while Joe Kaplowitz lays down a funky electric piano groove a la Joe Sample. The concerto culminates with a Richardson cadenza that traces the six continents covered in Bugles Over Zagreb in reverse order.

Throughout it all, Richardson's virtuosity is breathtaking to behold as he shifts from B flat trumpet to cornet to flugelhorn to mutes and piccolo trumpet, executing both improvised and written solos with both passion and precision. His lightning quick execution, deep growls and stratospheric high notes are enough to make send any trumpeter running for the woodshed. And if your lips aren't already smarting from the thought of all that trumpet work, he still has five chapters of music to go on Bugles Over Zagreb.

The "Dukal Bugles" portion of the CD is based on a work premiered by Jon Faddis and the Great American Music Ensemble at the 1999 International Trumpet Guild Conference. It's a thrilling musical journey through the history of Ellington trumpet players, hitting on Ray Nance, Rex Stewart, Cootie Williams, Bubber Miley and Clark Terry (Cat Anderson is saluted throughout many of the pieces).

Tastefully executed, the opener "Ray Nance/Take The A Train" immediately shows that Richardson is up to the task as he puts on the hat mute and transitions the famous melody into ballad territory. Doug Richards' softer touch is at play here, expressed by the gentle sway and first class musicianship of the Croatian orchestra.

You'll be sure to smile when you hear Rex imitate Rex on "Rex Stewart: Boy Meets Horn" that delights with improvisations that recall the half-valves and pedal tones made famous by Stewart. Richards keeps it sweet and sentimental with "Cootie Williams: Concerto For Cootie" which features Richardson juggling yet more technical challenges with the pixie mute and plunger. The set closes out in classic Ellingtonian fashion with "Clark Terry: It Don't Mean A Thing If It Ain't Go That Swing" that turns the limelight to the Croatian trumpet section who play with polish and style. Richardson then channels Clark Terry with smooth precision through the flugelhorn and exits with a bravura high note finish.

Taken as whole, Bugles Over Zagreb is bracing and beautiful, demonstrating Doug Richards' enormous capacities as a composer and arranger. Together with Rex Richardson is as his mouthpiece, he has hit his stride in his vision to create orchestrated jazz of the highest order. 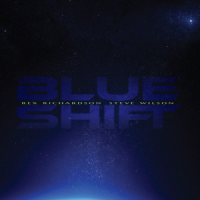 Blue Shift is dynamic quintet outing that reunites alumni of the VCU jazz program and functions as a creative platform for Richardson and guest saxophonist Steve Wilson (also a VCU alum) to reinforce their hardcore jazz credentials.

But this is not the straight ahead hard bop recording you might expect. There's a dark alchemy at work here in the tone of the compositions and the gritty electric guitar work of Trey Pollard. This is a congress of top jazz musicians who know each other well and feel comfortable taking chances and challenging each other.

The record opens with the roiling Pollard composition "Tell, Tell Me Again" that vacillates from dark waves of free-form soloing by Richardson and Wilson to the calmer waters of the primary theme. Drummer Brian Jones' composition "Big Sur" has a similarly schizophrenic appeal, though relying much more on unison playing by Richardson and Wilson and the heavy march of drum and bass. Wilson pulls no punches on this number and Pollard's twangy low chords add to the dark majesty of this impressionistic piece.

Things really catch fire on "Red Shift" with Richardson taking intervallic leaps with lightning speed, Pollard ripping the frets on electric guitar and Wilson digging deeper than I've heard him in some time. And as with many of the songs on Blue Shift, Richardson takes unexpected strategies, often exploring the higher pitch possibilities within the Phrygian scale while lending an overall Greek or even Middle Eastern feel to the proceedings.

For post-bop trumpeting firepower, Richardson's chops are hard to match, particularly on the hard-charging "Tomorrow's Destiny." The slow drag blues of "Blues For David Henry" is compelling with Richardson and Wilson's intertwining of muted trumpet and alto sax. But perhaps the most memorable tune is the gently hypnotic "Cyclical" with its echoing chain of descending notes from the two session leaders and sublime bass work by Randall Pharr.

Blue Shift refers to a stellar phenomenon (along with red shift) where light changes as objects move closer or farther away from us. With Blue Shift and Bugles Over Zagreb: The Music of Doug Richards, jazz fans should be excited that Rex Richardson's star remains in blue shift this year.

Bugles Over Zagreb: The Music of Doug Richards