By KARL ACKERMANN
February 17, 2016
Sign in to view read count 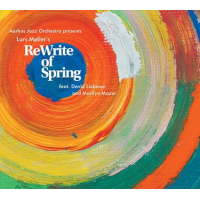 In the early twentieth century, at a time when the Russian composer Igor Stravinsky was barely known, he had already composed the celebrated works Firebird (1910) and Petrushka (1911). The 1913 work, The Rite of Spring, was to become renowned both as a ballet and as a stand-alone orchestral score. The Paris premier at the newly opened Théâtre des Champs-Élysées set off a violent riot though it was never clear if the avant-garde music, the Vaslav Nijinsky choreography, or a publicity stunt that set off the well-heeled audience. Nevertheless, the subject matter of The Rite of Spring went on to influence the way art impacted collective social thinking.

Danish saxophonist and composer Lars Møller has been the Artistic Director of Aarhus Jazz Orchestra since 2012. He based ReWrite of Spring not on the original ballet score but on Stravinsky's processes and systems of composing. Møller is a major Scandinavian jazz figure who had spent years living and learning in both India and New York. He adroitly combines elements of traditional jazz with Nordic folk and European classical to create uniquely expressive music. He has seven releases as a leader, most with his now defunct Lars Møller Group. As a saxophonist, he has played or recorded with Jon Balke, Bobo Stenson, and Maria Schneider among many others. Møller has worked with numerous big bands across Europe and has performed regularly with The Danish Radio Big Band for more than ten years.

Saxophonist Dave Liebman had been a mentor and guiding force in Møller's early musical development and the composer felt there was no more logical choice for the project. Among Liebman's long list of accomplishments (including hundreds of recorded compositions), he is an educator and noted author. No stranger to large ensemble settings, he has performed with the Brussels Jazz Orchestra, the The WDR Big Band Cologne and NDR Big Band, the Metropole Orchestra of the Netherlands and many others.

Primarily known as a percussionist/drummer, Marilyn Mazur's broad musical talents include piano, vocals and other talents. The New York City born artist has lived in Denmark from early childhood and her musical roots are deep in that part of the world. Mazur has worked with bassists Niels-Henning Orsted Pedersen, Arild Andersen and Eberhard Weber, trumpeter Palle Mikkelborg and Nils Petter Molvaer, and has worked extensively with Jan Garbarek. Mazur is best known for her associations with Miles Davis and Gil Evans.

ReWrite of Spring is a two-disc set with one being a studio version and the other live. A recurring, indecisive sensation permeates the opening of "Evocation," an exotic, quietly swirling melody that eventually gets charged by the brass and reeds. Mazur's udu drum precedes powerful solos from Liebman—as the orchestral layers begin to build—and then the tenor saxophone of Michael Bladt. The brief "Interlude,' incorporates recurrent chords from the last movement, "Procession." "Spring Square" moves from primal to dark hues as phrasing of increasing intensity builds before closing with a subdued reference to the initial theme. Mazur's various percussion instruments intercede at strategic points in "Procession," helping to move the atmosphere from a propulsive dance beat to a rock-like passage driven by Thor Madsen's guitar and Liebman's forceful soloing.

The second ReWrite of Spring disc consists of three live versions of "Part1: Evocation," "Part 2: Spring Square" and "Part 3: Procession" preceded by the brief "Introduction." In each case, the live versions are longer and left open to a bit more improvisation. The collection as a whole is an ambitious project, brilliantly conceived and performed by world-class artists. One need not have an affinity for Stravinsky to appreciate this bold accomplishment.