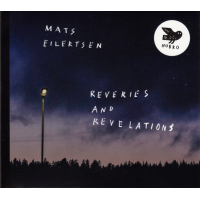 In rock music, the heyday of "and friends" albums (Leon Russell or Eric Clapton releases for examples) seems long past; on such records, the headliner was joined by a famous star names on different tracks, their presence helping to attract publicity and boost sales. The last hooray of the genre probably came with charity recordings such as Band Aid's "Do They Know It's Christmas," "We Are the World" and their ilk. However, away from rock music, Reveries and Revelations suggests the genre may be alive and well in the Scandinavian jazz and improvised music community, with bassist Mats Eilertsen in the lead role. Joking aside, Norwegian jazz and improv musicians tend to be very close-knit, with many players being in several ensembles, and happy to play or record with friends and friends-of-friends, leading to a well-connected community of talent. Arguably, such variety helps keep players fresh and inventive rather than being in one group with the same players week in week out. Eilertsen is a classic example, being a notional member of dozens of ensembles, large and small, some recording regularly, others playing intermittently. So, when he "presents his innovative cut and paste solo project featuring cameos from a supergroup of friends," there are plenty of people he can call upon. For instance, he once played bass in Food—the quartet that included Iain Ballamy on sax, Arve Henriksen on trumpet and Thomas Strønen on drums—and, while Ballamy does not appear here, both Strønen and Henriksen do, although not together. Remarkably, given the range of players on the album, no two of them were ever together to record the album. Instead, after Eilertsen had recorded his parts—which he describes as "me fooling around in a way"—he sent his files to selected musicians and asked them to add their own touches, which they did in their own studios. The only exception was Strønen, who Eilertsen asked to send him files, which he then edited and added to. It is a great credit to Eilertsen that the finished album does not hint at this cut-and-paste methodology, instead sounding like a coherent, collective venture. That coherence is not solely due to skilful editing and producing but also to Eilertsen's bass work which underpins the album as a solid foundation, and to his memorable, melodic themes that provided inspiration for the others' responses. Although guest appearances are liberally sprinkled throughout the album to good effect, the real litmus test lies in three of the ten tracks on which no guest appears and Eilertsen plays alone on bass and various instruments. Those three tracks prove to be just as engaging and atmospheric as the seven with guests; they indicate that Eilertsen could have made a very good solo album all by himself. (Check out "Tundra" YouTube, below.) In effect, the guest appearances fulfil the role of icing and decorations on a cake; if a cake is no good, that cannot be disguised by icing and decoration. Eilertsen's cake is a treat. Recommended.