By BILL DONALDSON
August 1, 2001
Sign in to view read count 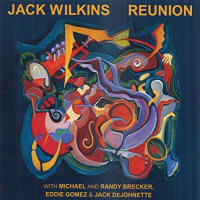 Reunion is just that.

And for jazz listeners who missed Jack Wilkins' outstanding 1977 release, Merge, the first time out, or for those who are too young to remember it, Reunion brings back that group for a brief moment in time.

It wasn't easy. Schedules conflicted and everyone was busy, but they found a slot when they could record. Try as they might, Wilkins and the producer weren't able to pin down saxophonist Michael Brecker for more than two tracks. But the "what if" questions about the addition of Michael Brecker are answered on Reunion, for the Brecker brothers do team up on "Kiwi Bird" and Horace Silver's "Break City." The remainder of the CD consists of the personnel who created such a pearl 24 years before, one that awaited discovery by a guitarist who recorded too infrequently as a leader.

The original group grew incrementally, at first consisting of Wilkins and bassist Eddie Gomez when they played at Sweet Basil. Later, Jack DeJohnette and Randy Brecker joined in. The result was/is a distinctive group, each member with his own personal sound. Yet, they all intuitively understand the value of interaction and spontaneity. In fact, this group is one case where the rhythm section leads the horn, so recognizable are their styles. Gomez' full virtuosic sound in instantly recognizable, no matter where he performs. DeJohnette developed his own individual approach to the drums that, like all great drummers', enlarges the meaning of each tune through texture and pulse.

Often, the genre of choice is bop, which makes sense due to the influence of musicians like Horace Silver upon members of the group. Recalling their work in his group, the Brecker brothers perform Silver's "Break City," and Michael in particular stretches out in full command of his instrument.

But Wilkins had more in mind than a re-creation of his previous album. "Reunion" the song is a minor-keyed excursion that invites close listening as the musicians improvise over its modal structure. Wilkins develops the tune as through successive choruses of atmospheric embellishment, which are notable in addition for Gomez' and DeJohnette's irresistible rhythmic drive that they build.

The slower tunes include Gomez' "Scott," a 3/4 tribute to his son that he bows in introduction before Wilkins joins in to break out the melody. Gomez' and Wilkins' solos are the highlights of the tune as they demonstrate mastery of their instruments that has only improved over the years. Wilkins ends the CD with the standards "But Beautiful" and "All The Things You Are," "But Beautiful" being a trio setting that lets Wilkins relax as he explores the tunes harmonic richness.

After all of these years, the Wilkins group is intact and inspiring. If their now-busy careers prevent the opportunity for them to perform live, at least we have Reunion to document the group's natural ability to perform, and to communicate, as if 1977 were only yesterday.