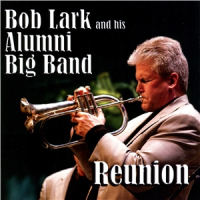 Veteran jazz trumpeter and flugelhorn master Dr. Bob Lark has directed many big bands in more than 20 years as Director of Jazz Studies at DePaul University in Chicago, Illinois. With Reunion, Lark reunites 22 musicians from those bands as his Alumni Big Band, debuting the group on a monster collection of powerful orchestrations. While the teacher provides the eleven original pieces, the class assignment was to pen the arrangements, as six of the alumni do so well here.

Saxophonists Jon Irabagon and Ted Hogarth, and drummers Dana Hall (Terrell Stafford) and Bob Rummage (Rob Parton's Jazztech Big Band and a professor at DePaul), are just a few of the many members of the band that have established themselves in the jazz world. It would certainly not be farfetched to assert that the caliber of players in this orchestra is world-class in every respect. Perhaps their common educational bond is one reason why. The one piece Lark did arrange on this project was the title score, drawing from the blues charts of Quincy Jones, Slide Hampton and Count Basie, and featuring the majority of the horn section in solo spots, as well as his own improvised flugelhorn salute to Clark Terry.

Hogarth's husky baritone and Irabagon's alto are the highlights of "Mad Dan's," one of two Dominic Marino arrangements. The other, "Until You," captures Lark, pianist Ryan Cohan and Irabagon on outstanding solos. Bassist Joe Policastro, trombonist Tim Coffman, tenor man Glenn Kostur and Lark do the honors on Thomas Matta's brassy arrangement of "First Steps." The first delicate ballad, "Cathy's Song," is a musical portrait for Lark's wife and he performs the solo feature warmly on flugelhorn. "Winter's Touch," the other soft ballad, finds Lark's rich flugelhorn voice fronting lush orchestrations from the band.

The band stays on the lighter side with the gentle, bossa-styled "Abruzzi," highlighting solo performances from arranger and trumpeter Kirk Garrison, vibraphonist Justin Thomas and Chris Madsen on alto. The swing is alive and well on the lively "Suggestions," but not as overtly hot as on the set's sizzling "Tango Caliente." The rare Latin-styled number, one of the more forceful pieces on the album, offers the Doctor (this time on trumpet) one last solo outing alongside trombonist Craig Sunken.