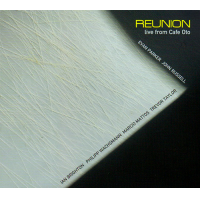 Ian Brighton, musically dormant for around three decades, had a welcome renaissance a year ago with his album for Confront Recordings, Now And Then. Included on that album was an archival track, "30 Years From Yesterday" recorded in 1986 with Philipp Wachsmann, Marcio Mattos and Trevor Taylor. This quartet was collectively known as String Thing and made a return appearance on this live album recorded at Cafe Oto, London on August 14, 2016. The quartet alone features on "Why Did We Leave It So Long?," the second track of Reunion—Live From Cafe Oto, populated by much arco violin and double bass plus Trevor Taylor interjecting on vibraphone and sampled voice recordings, with sporadic chordal interventions from Brighton. The overall effect evinced on this long track, and at just over thirty minutes the longest on the album, is uncompromisingly hypnotic, the sonic equivalent of a "page-turner" novel.

Brighton himself gives a solo performance on the first track "Here, And Hear" where his characteristic sustenato chords and single notes puncture the silence. The third track, "Walthamstow Cheesecutter" is a duo set featuring Evan Parker on soaring and swooping soprano and John Russell playing with unfettered vigour. The title, incidentally, is a reference to the guitarist's home town in North East London. The final track, "What Else Did You Expect?" is an ensemble piece embracing all six musicians and in effect an improvisational "supergroup." This fifteen minute outing is as riveting as anything heard in improvisational music and whilst not quite equivalent, does bear some resemblance to Tony Oxley's seminal album 4 Compositions For Sextet recorded and released in 1970 by CBS and on which Parker was a notable participant.

Aside from the slightly intrusive inclusion of fifty seconds of audience applause at the conclusion of the quartet number, there is no extraneous material here and importantly the organisation of the tracks makes possible the comparison of the respective styles of Russell on steel-strung acoustic guitar and Brighton on his trusty Gibson ES-175. This is a rare and important piece of musical history that will positively reward repeated plays.

Here, And Hear; Why Did We Leave It So Long?; Walthamstow Cheesecutter; What Else Did You Expect?