By DAN MCCLENAGHAN
December 28, 2015
Sign in to view read count 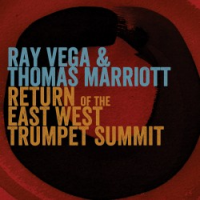 Seattle-based trumpeter Thomas Marriott plays well with electricity. Specifically, with the Hammond B3 organ. The most memorable of his now nine CDs on Origin Records feature either the Hammond B3 or some serious Moog synthesier/Fender Rhodes work: Crazy: The Music of Willie Nelson (2007 ), with Ryan Burns on electric keys; Human Spirit (2009), featuring Gary Versace on B3; and now Return of the East-West Summit, with the versatile George Colligan sitting in on the Hammond B3, and Marriott's mentor, trumpeter Ray Vega sharing leader duties.

2010 was the year of the first paring of Vega and Marriott on Origin Records, with East/West Trumpet Summit, that, like it's follow-up, tipped a hat to a couple of the legendary rip-it-up trumpet pairings: Fats Navarro and Howard McGhee, and Freddie Hubbard and Woody Shaw. Return of the East-West trumpet Summit, like its predecessor, leans heavily on the Great American Songbook and jazz standards, with tunes from trombonist Curtis Fuller, hot bop trumpet man Lee Morgan, along with pianist Erroll Garner's most famous tune, "Misty," a very original take on Charlie Parker's "Quasimodo" and a quirky reading of the much-covered "What Is This thing Called Love."

Back to the George Colligan's Hammond B3. In small jazz combos, the more common piano is punctuation for the stories the trumpeter tells. Ringing percussion cutting chunks of sounds into sections. With the organ, it's all run-on sentences and run-on paragraphs, even cool-breeze drones for the rest of the band ride on, leaving the percussion/punctuation to ever-deft drummer Matt Jorgensen here.

The trumpet guys: Vega and Marriott are stellar, blowing with the fire and finesse, bringing in the mutes (harmon and cup) from time-to-time to give a mix to the sound. And "Misty" and "Quasimodo." Classic takes on classic tunes.