By FRIEDRICH KUNZMANN
November 30, 2017
Sign in to view read count 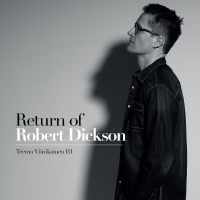 Finnish guitarist and composer Teemu Viinikainen III has played a part in the jazz world for almost 20 years now, gaining much recognition and popularity in his home country for his achievements with, among others, Blue Note signed U-Street All Stars in the early 2000s. 2017 sees Teemu very active—having greatly contributed his singular guitar sound to recent Verneri Pohjola outing Pekka and now releasing his third Solo Record Return Of Robert Dickson.

For Return Of Robert Dickson, Teemu gathers together a trio with fellow countrymen Joonas Riippa and Mikael Myrskog and at times further enhances the instrumental spectrum by overdubbing significant guitar lines.

The opener (which later reappears for the close) is of minimalistic nature, introducing a simple and dreamy guitar line accompanied by synthesizer sprinkles and percussive improvisation. The following piece though introduces a sound more representative of this venture of an album. A syncopated 8/8 hook on Fender Rhodes experiences further syncopation by the introduction of a hemiolic bluesy guitar melody in a tight rhythmic bed laid out by Joonas Riippa. Harmonically and structurally the piece doesn't progress but creates space for the virtuosos to solo—Viinikainen naturally taking the lead.

It is the elements displayed on "JS" that build the center of the subsequent pieces as well and that are responsible for creating the highly energetic tension. The realization that "Birdman" is in an 8/8 kicks in very late due to, once again, two highly complex overlapping syncopation patterns introduced by guitar and drums. Harmonically the pieces shift in modes, leaving much freedom for solo virtuoso by all involved. 'Amoroso' sees the band taking a break from fast rhythm movements and, in contrast, introduces slowly executed conversations of somnus nature.

A further element defining this record that craves mentioning is Viinikainen's guitar sound. In the course of the years he has not only mastered his skills in unique improvisation but also established a singular guitar tone—a slightly distorted and reverb-heavy mix of effects allowing him to play an eccentric crossover between Rock, Jazz and blues, leading to the fusion sound, that clearly had a great impact on the overall sound of the above mentioned recording Pekka as well.

With Return Of Robert Dickson Teemu Viinikainen has added a fine modern fusion record to this years' releases and proven of great maturity and ambition. The One or the other melodic outburst might have contributed to longer lasting impressions, though at the same time it is the simplicity in harmony and melody allowing this trio to concentrate on the enthralling rhythmical "triolog."