Rick Drumm and Fatty Necroses: Return From the Unknown 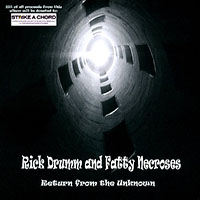 Music has figured large throughout drum industry veteran Rick Drumm's life. From drumming in a 60-piece Youth Band as a teenager to the US Air Force Band, and through various circus bands—including over 1000 performances across the USA in the Barnum and Bailey Circus—to President of world-renowned string manufacturers D'Addario & Company, it's been quite a ride. In 2009, Drumm was diagnosed with Non-Hodgkin Lymphoma and had to undergo chemotherapy. Drumm's friends got together to play a house gig to raise his spirits, but things developed a momentum, as it seems they do in Drumm's world, and the result is this rather excellent slice of guitar-centric jazz.

Inspired by '70s jazz-fusion/jazz-rock and funk, the music is retro in places, but there's no escaping the sheer energy, the compositional strength and the first rate musicianship which make this one of the most appealing jazz-fusion CDs of the year. Guitarists Fred Hamilton and Corey Christiansen wrote the music and fully exploit the possibilities of the octet with astute arrangements; the pair also plays up a storm. The episodic "Fatty Necrosis Sings the Blues" has a hint of trumpeter Miles Davis circa late '60s, with its insistent rhythmic pulse and Cuban keyboardist Axel Tosca Laugart's dreamy electric piano underpinning everything. Trombonist Mike Brumbaugh and trumpeter Pete Grimaldi state the main melody in singing unison, a role they fulfill to great effect throughout the recording.

The leader's sotto voce rumbling drums lie at the core of the ruminative "Gentle Spirit," a delicate tone poem that features lazy trombone and finishes unexpectedly with drums alone. "Indi Funk" possesses the same drive-cum-melodic DNA as guitarist Jimmy Herring's writing and is over all too soon. Bassist John Benitez' brief but deeply lyrical intro sets the tone for the aching, slow-burning blues of "Not Whatever." Frank Catalano's emotionally loaded tenor phrasing in turn paves the way for Christiansen's epic guitar solo, which crowns the piece. By contrast, "Detours" hits its stride early, and features incendiary solos from Hamilton, Catalano and, especially, Christiansen.

Guitar and bass cut a James Brown strut on "Pulled Pork Sandwich," an instantly appealing, fiercely grooving number which also owes a debt to The Meters. Drumm's infectious New Orleans rhythms are kindling to Garibaldi, Catalano and Benitez, who are all particularly inspired on this joyful group workout. There are plenty of teeth, too, in the playing on "Just a Drop," with Laugart giving his liveliest intervention of the set on piano, and another blistering solo from the impressive Christiansen. Joe Zawinul's "In A Silent Way" might have provided the blueprint for the minor epic "Out the Door," with its unerring rhythmic pulse, Hamilton's John McLaughlin-esque lines, and muted trumpet; there is, however, more muscle in Drumm's ensemble, typified by Catalano's ripping tenor lines.

Empathetically buoyed by Drumm, Catalano's searing, heartfelt cry on the poignant "Return" puts a fittingly emotional seal on a consistently absorbing set. It would be a shame if this were to be a one-off adventure, as there is chemistry at play here which suggests there are even greater things to come.

25% of the profits from this recording will go to Strike a Chord , a non-profit organization which uses music to help seriously ill and disadvantaged children.