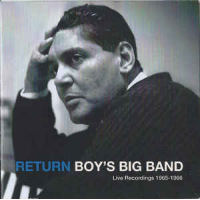 The album opens with Duke Ellington's "Solitude" and John Coltrane's "Blues Minor" from a concert taped July 19, 1965, in Hilversum. The second concert, held in Groningen in October '65, encompasses Nat Adderley's "Work Song," baritone saxophonist Herman Schoonderwalt's "Blue Boy," Edgar's "Now" (a.k.a. "Competitive Challenge"), the album's longest track at fourteen minutes, and Loevendie's "Return." The producers acknowledge that sound quality on the last two numbers, from an April '66 concert at Amsterdam's Concertgebouw, may be less than satisfactory (it isn't) but endorse their inclusion because of the world premiere of "Finch Eye." Loevendie's magnum opus is preceded by the Jerome Kern / Otto Harbach standard "Yesterdays" and followed by the earnest finale, Edgar's blues-drenched "Play the Game Now" (which consumes another thirteen minutes-plus of the album's generous seventy-four-minute playing time).

Even though these performances were recorded more than fifty years ago, they remain fresh and alive, serving as a reminder that Boy Edgar's band was among the finest of its time, one that warrants comparison to one of its more celebrated counterparts, the masterful Clarke / Boland band from France. Return is part of a series of reissues designated Treasures of Dutch Jazz. Should future releases live up to this standard, they would indeed be more than welcome.