By SCOTT MORROW
December 9, 2002
Sign in to view read count 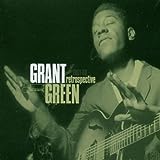 About five years ago, I heard guitarist Grant Green's "Ain't it Funky Now," a burnin' J.B. cover on Blue and Funky , a various artists Hammond organ compilation from Blue Note. I’d never heard anything like his honest, cutting tone – it rocked and funked like crazy. I hadn’t purchased much jazz, other than Miles and Coltrane, since I was in high school. And I’d always hated jazz guitar – guitars were supposed to be distorted! Now, 30-plus Green CDs later, I’ve been listening almost exclusively to jazz and my favorite is still Grant Green.

Basically, Retrospective covers his first tenure at Blue Note, 1961-1966, from his discovery in St. Louis by a touring Lou Donaldson, and subsequent driving to New York in his green Cadillac where he played on more than 20 LPs in his first year, through to his short incarceration (yes, he was intimate with the blues)in 1968. Culled from 39 albums, Retro contains 32 songs from his solo LPs, as well as his session work, all spread over four CDs. The first two discs are solid organ groups. Everything from down-home, trad-dad sax squealing testifying blues with longtime cohorts like John Patton, to the wild stretching of the form straight into outer space that he developed along with organist Larry Young (Lifetime) and drummer Elvin Jones over the course of four albums. One, Talkin’ ‘Bout Grant Green has a sound perfectly, elegantly described by The Penguin Guide to Jazz as sounding akin to "chocolate fudge ice cream sitting on ice cubes." Ahhh...

In truth, it all sounds good, and it should since every song was recorded by legendary jazz engineer Rudy van Gelder, a man whose sound has never been bettered. These sparkling, 24-bit remasters serve both as an excellent overview for the average straight-ahead jazz/Grant Green fan and for the totally uninitiated as an introduction to Blue Note’s stable of classic session men (like Green), most of whom were recording artists in their own right. But in the end, it’s his completely original, still unsurpassed guitar playing that makes it so exciting and essential.


"I used to sit up all night copying Charlie Parker solos," Grant once said. He’s also mentioned that horn players like Miles, Coltrane and Rollins had a profound effect on him. These influences become obvious when you listen to his unique, single-note, crisp, linear style. He rarely plays chords, and when he does, they’re simple two-or-three note suckers. And in this respect he’s more like Charlie Christian than his then-contemporary Wes Montgomery (who received all that adulation and respect Grant so sorely fought for). He may not have played octaves much, but he had an endless stockpile of riffs in his trick bag that he jealously guarded from other guitarists like one of his young rivals, George Benson. Benson, who has often acknowledged his debt to (and swiping from ) Green, has said "Grant made the guitar come alive and sing. Nobody else I ever knew could make a guitar talk like that or speak like that." One can only wonder what Grant’s feelings were Benson hit it big in 1975...

These riffs were catchy and melodic and structured so that they always seemed new. His solos build slowly, often beginning with an insanely repeated phrase (repeated in such a way that people who know better, have actually thought a CD was "skipping."), digging himself in ever-deepening grooves, grooves so deep that it seems like he’ll never find a graceful way out. But, he always does, and the no-overdubs quality of classic jazz is also part of the attraction. We know that on any of his wild explorations, he could blow a note, but he’s so damn consistent it just never happens. That’s digging a groove, dammed entertaining and nobody’s ever done it better.

Two tracks must be mentioned. One is his fine version of "My Favorite Things," recorded with long-time Coltrane band mates Elvin Jones and McCoy Tyner. Can you think of any other guitarist who’d have the guts to sit in that chair? The other, "Ain’t Necessarily So," is one powerful-hot version of the Gershwin tune, motivated by thunderous drum master Art Blakey, who drives Green to higher and higher heights, infectiously egging him on both vocally and musically. THIS was the song that sold me on the Big Green Man, and I dare you to try and sit still while listening to it.


Here’s hoping for a Volume 2 , a retrospective of his funky 1970s music from his second term at Blue Note with songs like "Sookie Sookie," that have been sampled to death over the last decade and are a big part of the reason for his recent popularity and re-evaluation. Overlooked by jazz fans and downright despised by critics, it may be part of the reason why at the time of his sadly premature death at age 43 (while touring), Grant Green had to die so forgotten. Whatever the reason(s), let’s be thankful for all the Green activity going on today. As John Scofield said, "It’s funny. When Grant was around, I took him for granted. (No pun intended.) But since he’s gone – me, like the rest of the world – now I just can’t get enough of him. When he was around, he was definitely not a star, though he worked and people knew him. It’s so cool his music has gotten a new audience." Cool, indeed.