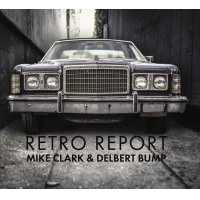 Go ahead. Judge this album by its cover. That 1970-something Ford grill tells you everything you need to know. It's big, funky and stamped Made In USA.

These 11 cuts are Hammond-organ groovy. Which is to say Delbert Bump groovy. And the only thing better than a Bump groove is one paired with former Headhunters drummer Mike Clark.

That's Headhunters as in Herbie Hancock's Headhunters, a band Clark was proud to call home in the early '70s. If you've never heard his contribution to Hancock's 1974 classic "Actual Proof," go find it. Clark delivered one of the all-time great jazz-funk drumming performances.

Bump, besides having one of the best names in jazz today, is a respected songwriter and teacher whose work has earned him a stack of awards. He was also part of Clark's 2010 Carnival of Soul.

We're lucky to hear them together again. Retro Report is hot. No other way to put it. Clark and Bump go pedal to the metal for 63 eight-cylinder minutes, along with the fine guitarist Elias Lucero. Even the ballads pack a punch.

The disc is out on the fashionable Ropeadope, home to Christian Scott aTunde Adjuah, The Pollyseeds and a host of up-and-comers. Clark is very much in the thick of things again. He's been recording with a new Headhunters lineup, with founding member Bill Summers. Their 2012 Platinum included guest spots by Snoop Dogg, George Clinton and Killah Priest. He's got two new albums cued up for 2018—one with fellow-Hancock alumnus Eddie Henderson and another with Mark Sherman, Chase Baird and Felix Pastorius .

Good to see Bump along for the ride again.