By FRANCESCO MARTINELLI
September 26, 2013
Sign in to view read count 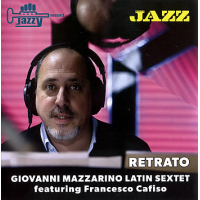 There's something very appealing for me in Giovanni Mazzarino's piano style, as well as his way of thinking. Hailing from Sicily— whose greatness in history and culture is equal only to the amount of problems it finds itself up against—like his famous namesake, the scheming Cardinal, the schemes he's scheming and the dreams he's dreaming seems always related to enrich the cultural life of his island.

A recent tour in Latin America with some the musicians included in this CD certainly left a mark in the creation of this suite, a little à la Duke Ellington; each track fits into the other in order to create a bigger picture, looking from a new vantage point to the history of jazz and its connections with Latin rhythms and styles, not as commercial fads but like progressive explorations of common roots. Sicily—with its Arabic, Spanish and Norman past is resonant with these same echoes. Mostly originals, the pieces build a "Latin American suite" of sorts, or if you want a gallery of impressions of the sounds, timbres, and colors from the countries visited, distilled in a series of powerfully evocative pieces. The gallery of portraits revolves around a central axis created by a medley of Beatriz by Edu Lobo and of the nuevo tango Oblivion by Astor Piazzolla. Mazzarino penned the project and most of the themes, but the album allows the listener to fully appreciate his sidemen, or rather collaborators, who are the key to a successful project. On bass and drums respectively, the trusted Riccardo Fioravanti and Stefano Bagnoli, a solid rhythm team that has been regularly working with Mazzarino for some time now, are firmly situated on the leader's wavelength; they keep straight and clean the track for this circumnavigation, with appropriate compact solos when requested, but above all they attain that deceptively easy simplicity of the great rhythm sections, with accents placed where they can propel the group without cluttering its sound. A good example are their variations on Una Noche a Medellin, for these ears one of the best tracks of the album.

Francesco Cafiso is negotiating maybe the most difficult turn of his incredibly successful career, based on a very rare musical talent. He's entering maturity as musician and as person. Listeners who are familiar with his earlier productions will find a changed musician: he manages to put his talents fully at the service of the project with finely shaded flute passages, and with alto workouts that seem to carry on what Charlie Parker started in some of his Latin-oriented recordings (Sly Mongoose) through Phil Woods and Sonny Stitt, towards Eric Dolphy and Ornette Coleman. This is my favorite among his records to date.

Dino Rubino (check out his Cd"Zenzi," certainly one of the best albums of 2012 for Italian jazz) is yet another product of the unbelievable Sicilian breeding ground. Equally adept on piano and trumpet/flugelhorn, he's employed here only as a wind soloist, with a dreamy and nocturnal sound, and a flowing melodic inspiration, as confirmed by his original tune, the yearning Pablo; but when needed he's bright and energetic.

Percussionist Mimmo Cafiero is a precious resource for Italian jazz and finding him again here is a great pleasure, since his fidelity to Palermo where he operates an important jazz school maybe removes him from the center of things. Latin American music has always been among his many passions, not only musical (he's an excellent photographer), and his contribution is especially relevant to the realization of the overall sound. Mazzarino is nearly not enough appreciated for his talents—maybe this CD will begin and redress the situation.