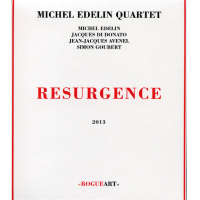 French flutist Michel Edelin is back among familiar faces on Resurgence, after his appearance with fellow flutist Nicole Mitchell on The Ethiopian Princess Meets The Tantric Priest (Rouge Art, 2011). He reconstitutes the quartet which last appeared together on Déblocage D'émergence (AA Records, 1995) for a studio set of 11 of his smart originals. On bass Jean-Jacques Avenel demonstrates why he held tenure for such a long time with the late Steve Lacy, freed to join the frontline by drummer Simon Goubert's purposeful time keeping. The final berth contains reedman Jacques Di Donato, a timbrally adventurous foil to the leader's pure-toned stories.

It's a tight group which benefits from the lengthy shared experience, manifest in the confidence and exuberance with which they navigate Edelin's imaginative modern mainstream arrangements. Edelin never wastes a note, elegantly furthering his narrative with each breath, often pitching himself against the group tempo to create a dynamic tension. The leader 's assured flute lines provide the solidity around which his bandmates orbit. That's particularly the case with Avenel who takes a prominent contrapuntal role throughout, giving the set much of its character and interest, as Goubert takes care of business with his tuneful cadences.

Even though there is a high degree of consistency, some cuts stand out. Foremost among them, "Jet Lag" features Avenel in melodic and rhythmically astute duet with both woodwinds, initially in cautious exchanges with Di Donato's voice-like bass clarinet, then after an involved unison, in mellifluous consort with Edelin's flute. Other highlights include "Errance Carminée" where a perky staccato theme, recalling the bassist's erstwhile employer, carries over to imbue both solos and ensembles with a stuttering urgency, the knotty "Witches" where overlapping riffs distributed around the group underpin a magisterial flute excursion, and "Tristezza Della Diva" where a mournful air for Edelin and Di Donato's clarinet leads to a disquieting colloquy of harmonics. On this showing, it would be a shame if we had to wait another 18 years before hearing more from this accomplished quartet.