By MARK CORROTO
September 26, 2015
Sign in to view read count 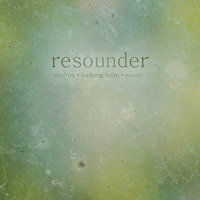 There is no connection whatsoever between the improvised electro-acoustic music of Resounder and Carl Stalling's musical accompaniment and his adaptations of music composed by Raymond Scott for Warner Brothers' Merrie Melodies and Looney Tunes cartoon. Except that, the music of Aram Shelton, Fred Lonberg-Holm, and Frank Rosaly evokes a sort of theatre of the mind. The soundtrack to a virtual cinema of cartoons.

Saxophonist and organizer Aram Shelton cut his teeth in the Chicago scene playing in Dragons 1976, Grey Ghost, and Jason Roebke's Rapid Croche before moving to Oakland. He has maintained his Chicago connection as a member of the collective Fast Citizens, Jason Adasiewicz's Rolldown, and his bands' Arrive and Steel Bridge Trio. His explorations and study in California have developed new uses for his saxophone by way of processing the sound and electronics. With this new trio, he reunites with players who themselves are accomplished improvisers.

The music is all improvised, with postproduction processing by Shelton to boost the tracks 'musicality.' That said, the processing is quite minimal, with bits of layering that are barely discernible.

His partners are skilled at the art of instant composing. Fred Lonberg- Holm is a favorite partner for players like Ken Vandermark, Joe McPhee, Paal Nilssen-Love, and Frode Gjerstad. His cello and guitar are enhanced, quite often by electronic manipulation that allows him to move effortlessly from Bartok to Hendrix. Likewise, Frank Rosaly is maybe the most in demand drummer working in Chicago today. Besides his work with Josh Abrams, Nick Mazzarella, Dave Rempis, Josh Berman, and Raoul Björkenheim (to name just a few), he works solo creating percussive and experimental electro-acoustic sound works.

The music within balances new sounds with an continual flow of reciprocal interactions. Like the aforementioned cartoon soundtracks, the improvising acts as a progressive narrative, that conjure mental cinema. The discs highlight is the track "Hope of Symbioses." It begins with the touch of cymbals, and the stretch of bowed cello against some processed alto. Shelton then slides in with the quietest dream of alto notes played against Lonberg-Holm's film noir plucked strings and Rosaly's drunken sailor beats. The action progresses until the film, well, just runs out.

Fading Memory; No Cover; The Listening Point; Not There; Bring Focus; Hope of Symbioses; Painted Corners; Half Day.